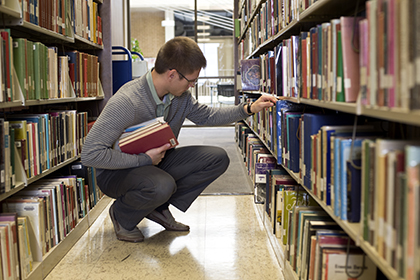 The University of Dallas has announced that it will officially rename the 54-year-old Cowan - Blakley Memorial Library to honor long-time University Professor Louise S. Cowan and Professor and University President Donald Cowan. She was a professor, former chairwoman of the English department, and former dean of the Braniff Graduate School of Liberal Arts; her husband, Donald, served as the university’s president from 1962-77 and was a longtime physics professor. The library will be known as the Cowan-Blakley Memorial Library.

“It is important to honor the vision of Donald and Louise Cowan,” said Cherie Hohertz, dean of university libraries. “Their intellectual stature and belief in the study of great ideas and works is represented in the library; it’s only fitting that we recognize them in this manner.”

Donald and Louise Cowan’s leadership helped create a lasting legacy at the university. During his 15-year tenure, the university’s reputation, enrollment and endowment experienced significant growth. Programs, such as the Rome Semester, and physical improvements, including the expansion of the J. M. Haggar Sr. University Center, were instituted and completed. His perceptive essays and lectures on education are still widely influential. Louise Cowan, an authority figure on Southern literature, gave form to the Literary Tradition sequence, a centerpiece of the university’s widely-recognized core curriculum. Her reputation as a great teacher attracted scholars and students to the Institute of Philosophic Studies and was recognized by The White House, which presented her with the Frankel Award, the nation’s highest teaching prize.

Upon her passing in November 2015, Louise donated her personal book collection to the university library. Once the collection has been catalogued and archived it will be available for circulation and library use.

“We are sincerely grateful for Donald and Louise Cowan's tremendous contributions and the role each played in the university's early and continued formation," said President Thomas W. Keefe. "We also must never forget the significance of Senator William Blakley's support as one of our greatest university founders.”

U.S. Senator Blakley, for whom the library was originally named, was immensely dedicated to the University of Dallas. He was appointed to the university’s first advisory board. Additionally, Blakley gave $7.5 million – more than $60 million in today’s market – to the university for the advancement of graduate studies to go toward the Braniff Endowment Fund and constructing several campus structures, including the Braniff Graduate Building, Braniff Mall and the Braniff Memorial Tower.

A renaming ceremony and dedication for the Cowan-Blakley Memorial Library will take place Thursday, Aug. 18. Further details will be released as they become available.