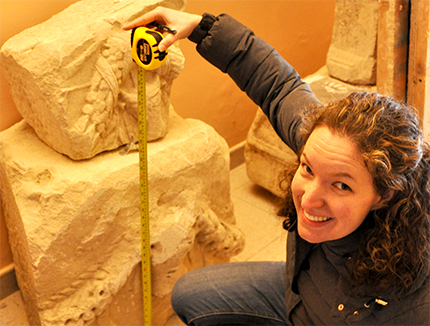 The UD Rome Program’s Affiliate Assistant Professor of Art Elizabeth Robinson, Ph.D., is the first recipient of the Milligan Faculty Development Fellowship. Having completed her first year of teaching on the Eugene Constantin Campus this past spring, Robinson received the grant for the purpose of conducting research and delivering scholarly papers in Italy and Romania in 2016.

Both papers relate to Robinson’s scholarly research within the field of Roman art and archaeology; the first, titled "Archaeological and Epigraphic Evidence for the Cult of Mater deum (Cybele) at the site of Larinum (Molise)," she presented at the Mysteries of Mithras and Other Mystic Cults in the Roman World Conference that was actually held on the Eugene Constantin Campus in June.

“The paper looked at the archaeological (three clay statuettes) and epigraphic (two inscriptions) evidence of the worship of the cult of Cybele at the site of Larinum, a site that I have studied in great detail,” said Robinson. “I was able to present some new ideas about the origins of the worship of this goddess at the site and elsewhere in central Italy, suggesting that she was worshipped there together with other gods. My ideas were supported by the group of scholars attending the conference and will help contribute to our knowledge of the origins and practices of this important cult. I was also able to talk with a diverse group of scholars about our campus in Rome and spread the word about UD and our programs.”

Founded in 2015 by means of a donation from Kathy (Uhl) and Danny Milligan, both BA ’91, the Milligan Faculty Fellowship is meant to encourage important and innovative research and teaching projects among current and former UD Rome Program faculty. In addition to this grant, the Milligans have generously given to other Rome Program causes, including support for a recent Ancient Bovillae conference held on the Eugene Constantin Campus. In cooperation with the Uhl family, Danny and Kathy Milligan also underwrite the Charles T. Uhl Memorial Rome Scholarship, providing financial assistance for economically disadvantaged students attending the Rome semester.

This new fellowship promises to be a significant asset to the Rome Program in its effort to guarantee high-quality teaching, to encourage meaningful faculty research and to strengthen ties between UD professors and the larger Italian and European scholarly community. Robinson is already the recipient of research awards from the Fulbright Commission, the Archaeological Institute of America and the American Academy in Rome. She has published in multiple journals and has chapters in several edited volumes, and most recently she edited papers on Italian urbanism in the first millennium B.C. for the Journal of Roman Archaeology Supplementary Series (2014). The Milligan Fellowship has not only facilitated Robinson’s attendance at two important European academic conferences but also provided support for her publications to come.

The Milligan Fellowship will allow Robinson to travel to Romania in October to present her research to a group of largely European scholars interested in investigating the same phenomena that she is — the integration of conquered peoples into the Roman state. She’s exploring this phenomenon in central Italy, while they’re exploring it in the Roman provinces. Titled "People of the Ancient World," this conference will take place at Babes-Bolyai University in Cluj-Napoca and is part of a larger project called “Romans 1 by 1.”

“My participation in the conference will allow me to present my ideas to a group of scholars on the cutting edge of this type of research, exchange ideas with them and receive feedback from them,” said Robinson. “Part of the conference is specifically dedicated to the methodology that we use, and I hope to be able both to contribute to and learn from the dialogue created there.”

For this conference, Robinson’s paper will be titled "Prosopography of the Leading Families of Larinum, circa 100 BCE to 250 CE"; in it, she’ll trace the activities of a group of individuals from eight families from the town of Larinum over this 350-year period, exploring their political successes both locally and abroad and looking at their participation in Roman institutions and Roman government after they were granted Roman citizenship. This study forms part of a larger project that she’s currently working on, which is based on some of her doctoral dissertation research; she’s in the process of reworking this material for a book currently under contract with Oxford University Press.

“As a scholar in the beginning of my career, it’s particularly important for me to be able to introduce my ideas to my colleagues through conferences and publications, and the Milligan Fellowship will allow me to participate in both of those venues,” said Robinson. “It’s also often the case that the material discussed in the conference papers presented by others can be useful in the classroom as well, and therefore the opportunity to attend these conferences in person, rather than simply submitting a paper to be read on my behalf, is invaluable to me both as a researcher and as a teacher.”