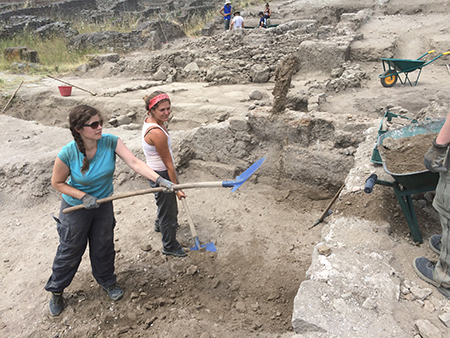 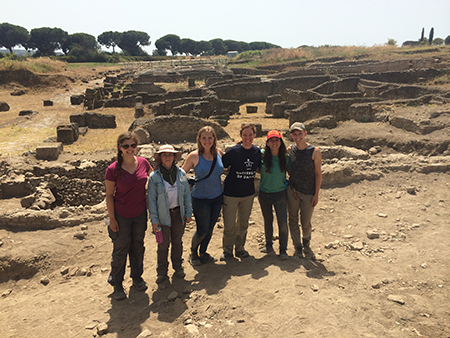 At UD, students are no strangers to studying the classics of Western literature and the history and culture that formed them. Undergraduates who participate in the Rome semester also get to experience much of this history and culture firsthand; as they say, the Rome Program makes the undergraduate Core curriculum come to life. However, this summer, five UD students took this firsthand experience to an even greater level by assisting in the excavation of the ancient Latin city of Gabii.

Located 11 miles east of Rome, Gabii has been the focus of an international team of Italians, Americans and Canadians for more than seven years now. Each summer, university students apply to aid in the excavation through a field school run by the University of Michigan at Ann Arbor. This past academic year, UD gained a connection to the site in the form of Affiliate Assistant Professor of Art Elizabeth Robinson, who has been part of the Gabii project from the beginning as a member of the topography team. She worked with Constantin College Dean Jonathan Sanford to arrange for UD students who participated in the field school during the summer to receive UD credit. As a result, UD tied with Yale University for the most students, after the University of Michigan, in the summer 2016 field school: each university had five students and one faculty member.

“We rely on archaeology for much of our knowledge of ancient peoples, and I wanted to experience the archaeological process firsthand. My time at Gabii brought me into more intimate contact with the classical world than merely studying the Romans and their neighbors in the classroom ever could,” said Rebecca Deitsch, BA ’17, a classical philology major who learned about the Gabii field school from Affiliate Assistant Professor of Classics Paolo Asso, who used to teach at the University of Michigan. “For example, reading about ancient fashion in my textbook could never compare with the thrill of seeing bone hairpins and buttons emerge from the ground beneath my feet. Being able to hold and examine these artifacts for myself made an enormous difference and helped me to feel closer to the ancient Latins, in spite of the formidable barrier of many centuries.”

According to Robinson, Gabii was one of the largest cities in the region of Latium in antiquity, with its origins dating to the same time as the foundations of Rome. Archaeological evidence suggests that Gabii was occupied from the 10th century B.C. to the second or third century A.D. If the poet Vergil is to be believed, the Latin kings of Alba Longa founded Gabii; these kings would have set out from near UD’s Eugene Constantin (Due Santi) Campus. Also, the historian Plutarch tells us that Gabii is where Romulus and Remus, Rome’s founders, were raised by shepherds.

“Gabii provides a unique opportunity to explore questions about the origins of Italian cities and their changing layout in the Republican period because, unlike Rome, it stopped growing and became abandoned after the third century A.D.,” said Robinson. “This means that the material remains that can tell us about how these ancient people created and organized their city, and how they lived their daily lives, lie just below the ground surface and in many cases have not been disturbed by later activity. This is very different from the case of Rome, where continuous habitation up to the present day has made it quite difficult to access some of the earliest remains of the city and its foundations.”

This summer, the University of Michigan team opened up three new areas (expanses of field), and each one held something different. Larger discoveries included what are believed to be late Roman walls from the third or fourth century built on top of an imperial Roman road; interrelated channels lined with a waterproofing layer, suggesting that they might have been pits associated with the production of wine or oil; and a series of floor levels related to habitation in the area in the Archaic period. Among the smaller finds were ceramics, carved pieces of marble, Latin inscriptions, mosaic floors, colored marble inlays, coins, gaming tokens and bone hairpins.

Representing UD at the site were Robinson, Deitsch, Morgan Flottmeier, BA ’19, Elora Kuhn, BA ’18, Elizabeth Lyons, BA ’18, and Erin Silkey, a student in the Braniff Graduate School of Liberal Arts. Kuhn and Lyons were both “Romers” during the 2015-16 school year, Lyons in the fall and Kuhn in the spring; Lyons learned about the Gabii project from a presentation Robinson gave during her semester, but Kuhn had actually applied before ever arriving in Rome, having been alerted of the opportunity by her adviser, Associate Professor of English Debra Romanick Baldwin. Flottmeier will be a spring 2017 Romer.

"Being able to immerse myself in the history on such a physical level was incredible," said Kuhn, a history major with concentrations in French and human sciences in the contemporary world. "I learned far more than I ever expected to, not only in archaeological techniques and practices but in ancient Roman cultural, economic and architectural areas as well, even learning how to distinguish between different types of cookware, pottery and bones. Not to mention I now know I'm fully capable of pickaxing, shoveling and manning a wheelbarrow for hours on end under the blazing Italian sun. Overall, I immensely enjoyed participating in this challenging and enriching program; I feel confident that it's greatly aided me in figuring out my future professional plans."

The students officially arrived for the project on June 19, with orientation June 20 and their first day in the field June 21. They stayed in apartments in the neighborhood of Trastevere provided by Accent International. A hired (air-conditioned) bus service transported them to and from the site every day.

“The Gabii Project has taught me to appreciate all the painstaking excavation and laboratory work that lies behind each piece of information in my history textbooks,” said Deitsch. “As I study Latin and Greek at UD and beyond, I’m sure my studies will be enriched by my new knowledge of archaeology, and I hope I’ll have another opportunity to do fieldwork in the future.”