UD Takes Home the Win at Irving’s Got Talent 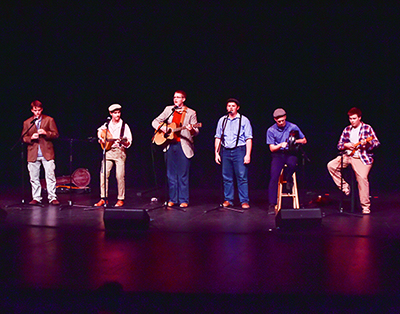 
At the 2016 Irving’s Got Talent Show in February at the Irving Arts Center, UD parents and alumni celebrated a win: a band of this year’s winners included five children whose parents are University of Dallas alumni. One of the program’s coordinators, Patty Danko, BA ’90, is a graduate of UD herself.

The annual competition, started in 2001, showcases the talents of Irving teens. Awards for the competition were presented in four categories. For the Best Variety Performance Award, the Breaker Boys (Joe Bartke, Sam Skinner, Caleb Skinner, William Morris, Charlie Spurgin and Bryan Jones) won. Five of the six members in the band have parents or siblings who are UD alumni or current students.

John Norris, BA ’84, associate professor of theology and associate provost, was one of the judges at this year’s event.

“Two of our boys are in the Breaker Boys,” said Rachel Skinner, BA ’00. “We were so excited for them. It was a really fun event.”

“Sam is hoping to go to UD,” Skinner added; her son Sam is currently a junior in high school. “UD is his number one pick.”

Danko is the recreation center supervisor at Lively Pointe Youth Center in Irving, which hosted the event. The competition took place at the Irving Arts Center in Carpenter Performance Hall. She earned her B.A. in art with a concentration in printmaking. After graduating from UD, Danko accepted a position at the university working for the communications and Athletics Department and later as the sports information director.

Following 9/11, however, Danko found herself pursuing another career, working with teens and working with the city of Irving on various projects. She didn’t expect the career jump.

“As you can see, sometimes you have to wear a lot of hats, and my liberal arts degree really helped with that,” said Danko. Danko has worked with the City of Irving twice: at Georgia Farrow Recreation Center and at Lively Pointe.

“I always try to include UD in things that we do here, because it's a win-win for both of us,” said Danko.

“UD is a great school and I like to stay involved with them as much as possible,” said Danko.

Danko is currently collaborating with UD’s associate professor of drama Stefan Novinski, BA ’92, and has also worked with UD’s basketball coach, Jarred Samples, involving activities and sports with her teens.

“I never would have guessed I would go to Irving for college,” said Danko. Now Danko is constantly looking for ways to incorporate UD in her teen programs.

“I think going to UD kind of really changed who I am and really developed me into who I am today. We want to develop good leaders and people in the community, and I think UD is a perfect example of that,” she continued.

For more information and a complete list of winners, check out the Dallas Morning News’ coverage of this year’s contest: http://irvingblog.dallasnews.com/2016/02/here-are-the-winners-of-irvings-got-talent.html/