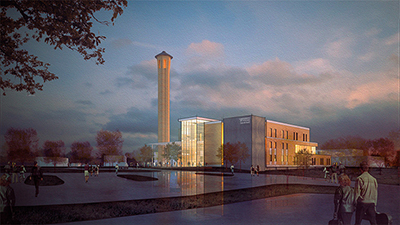 The University of Dallas has announced a name for its $15 million student services and administration building, which is expected to open by early 2018. The name — Cardinal Farrell Hall — will honor Bishop Kevin J. Farrell, who was recently appointed prefect of the Vatican Dicastery for Laity, the Family and Life by Pope Francis and will be elevated to cardinal in St. Peter’s Square on Nov. 19.

Farrell, an ardent supporter of the University of Dallas, has played a significant role in the recent growth and revitalization of North Texas’ only Catholic university. In addition to his official duties as seventh bishop of the Roman Catholic Diocese of Dallas, he also served as chancellor of the university until his departure for the Vatican last month. He is expected to continue his relationship with the university as one of its trustees.

“Each great campus features an iconic building that holds special significance to all who pass through its gates,” said President Thomas W. Keefe. “Ours will be Cardinal Farrell Hall — an enduring reminder of Bishop Farrell’s dedication to and inspiring support of UD.”

Farrell, who was appointed bishop of Dallas by Pope Benedict XVI, successfully presided over one of the nation’s fastest growing dioceses for nearly a decade. On Sept. 1 of this year, after being named the first prefect of the Vatican Dicastery for Laity, the Family and Life, he became the highest-ranking American working directly with Pope Francis. In his new role Farrell is responsible for promoting the Christian life of the laity, couples, families, young people and their mission in the church and in civil society.

In August, the University of Dallas officially broke ground on Cardinal Farrell Hall. The new student-focused building is the university’s most recent capital project and is part of a greater institutional effort to transform the Irving campus.

The three-story, 38,409-square-foot building is being constructed primarily of brick, zinc panels and glass, and will complement the architectural style of the university’s existing buildings and landscape, many of which were designed by the late “father of Southwest architecture” O’Neil Ford. Twelve thousand square feet of patio and terrace space and a two-story pergola running along the entire length of two sides of Cardinal Farrell Hall will help integrate indoor and outdoor environments and will create an abundance of natural light inside.

Leadership in Energy & Environmental Design (LEED) certification standards will be applied with the goal of achieving LEED Silver certification; LEED is a set of rating systems of green buildings as outlined by the United States Green Building Council. Design, construction, operation and maintenance will support the university’s commitment to energy efficiency, water conservation and green architecture.

Cardinal Farrell Hall was designed by Perkins+Will, a national leader in higher education architecture, who also designed the university’s SB Hall; the building is being constructed by Hill & Wilkinson, a Texas building contractor based in Dallas.

More information on Cardinal Farrell Hall is available at udallas.edu/farrellhall.