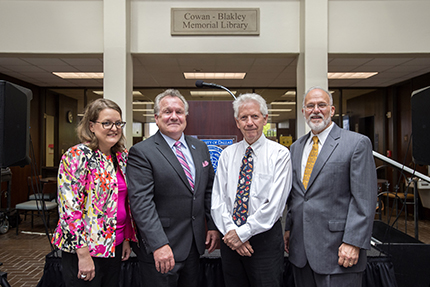 With introductions by President Thomas W. Keefe and Dean of University Libraries and Research Cherie Hohertz, two of the Cowans’ protégés each honored the new library name with memories of the two educators: their son, Bainard Cowan, who is UD’s Louise Cowan Chair and Professor of Literature, and Professor of English Robert Scott Dupree, who was once a student of Louise Cowan’s.

“We were fortunate to have Drs. Donald and Louise Cowan at the University of Dallas,” said Hohertz. “Their vision for the Core curriculum, graduate studies, the Rome program and many other facets of the university elevated the reputation of UD and revolutionized Catholic higher education.They understood completely the importance of the library as the heart of the institution, and it is our privilege to honor them and have you here to help celebrate the renaming of our library.”

To close the dedication, Bainard Cowan related how he was struck with the level of learning at the University of Dallas each time he visited the campus, sharing an example of his parents’ love of books that so deeply influenced both him and the university.

“In a sense, Don and Louise were a library in themselves,” said Bainard. “My parents’ coffee table reflected the excitement of thought and poetry, from their early discovery of Jacques, Joseph Campbell and others to the latest publications on Russian literature and literary theory. With them, scholarship threw off its covering as a dry, professional activity and regained its aura of fresh news – living and breathing and ever-new adventures. Books were living companions, helpful guides or worthy disputants.”

The Cowans’ leadership helped create a lasting legacy at the university. During Donald Cowan’s 15-year tenure as president, the university’s reputation, enrollment and endowment experienced significant growth. Programs such as the Rome Semester and physical improvements, including the expansion of the J.M. Haggar Sr. University Center, were instituted and completed. His perceptive essays and lectures on education are still widely influential. Louise Cowan, an authority on Southern literature, gave form to the Literary Tradition sequence, a centerpiece of the university’s widely recognized Core curriculum. Her reputation as a great teacher attracted scholars and students to the Institute of Philosophic Studies and was recognized by the White House, which presented her with the Frankel Award, the nation’s highest teaching prize.

U.S. Sen. Blakley, for whom the library was originally named, was on the university’s first advisory board and was immensely dedicated to the University of Dallas. Additionally, Blakley gave $7.5 million – more than $60 million in today’s market – to the university for the advancement of graduate studies to go toward the Braniff Endowment Fund and constructing several campus structures, including the Braniff Graduate Building, Braniff Mall and Braniff Memorial Tower.

Photo: From left to right: Dean of University Libraries and Research Cherie Hohertz, President Thomas W. Keefe, Professor of English Robert Scott Dupree, and Louise Cowan Chair and Professor of Literature Bainard Cowan each honored and addressed the significance of Donald and Louise Cowan and Sen. Blakley during the library's renaming ceremony on Thursday. The Cowan - Blakley Memorial Library is now known as the Cowan-Blakley Memorial Library.