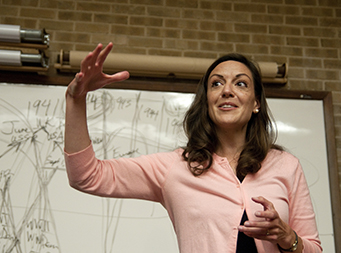 U.S. News & World Report’s 2017 rankings of the nation’s best colleges are out, and the University of Dallas moved up three spots from its 2016 rank to claim No. 12 on the list of best regional universities in the West. The university also was identified as the region’s eighth Best Value.

“Being recognized once again as one of the country’s top universities is a well-deserved honor and privilege, and is a testament to our world-class faculty and the quality of our rich academic environment,” said University of Dallas President Thomas W. Keefe.

This year’s No. 12 ranking among 124 institutions categorized as “regional universities” in the West also positions the University of Dallas first in North Texas, second among Texas’ 30 other regional universities and seventh among all Catholic institutions in the region. The region consists of 15 western states, including California, Colorado and Texas.

The Best Value ranking takes into account both the academic quality of the institution and the average amount of need-based aid provided to students. According to U.S. News, “Only schools in or near the top half of their U.S. News ranking categories are included because U.S. News considers the most significant values to be among colleges that perform well academically.”