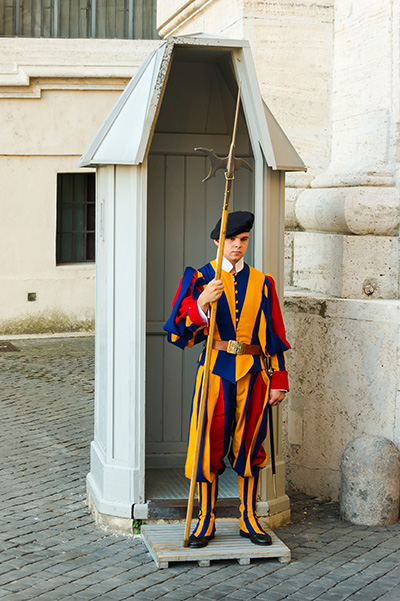 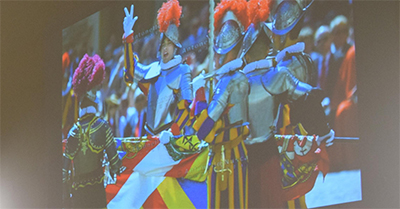 Renowned Italian filmmaker and director Gianfranco Pannone made an appearance on UD’s Eugene Constantin Campus in Rome this April with the first screening to an American audience (and one of the first public screenings) of his film “The World’s Smallest Army” (“L’esercito più piccolo del mondo”), which debuted in September 2015 at the Venice Film Festival.

“It was a test case for launching the film internationally,” said Rome Campus Director and Dean Peter Hatlie.

The film is a documentary on the Vatican Swiss Guard, which has protected the pope and his residence since 1506. The idea was to give a secular glimpse into the lives of the young men who comprise the guard, showing that they are much more than the stereotype of stiff soldiers who still wear armor and clothing hailing, style-wise, from the 16th century -- that they are, in fact, human.

Pannone honed in on new recruits from Switzerland, among them Leo, a woodsman excited for this experience in bustling Rome, and René, a theology student and intellectual who spends time in contemplation of his faith and his role.

One member of the Vatican Swiss Guard, Alabardiere Marco Radovinovic, was present for the screening on campus, as was producer Massimiliano di Liberto of the Solares Foundation. Rome Senior Chaplain Msgr. Thomas Fucinaro, also present, was instrumental in bringing this event together.

The majority of the spring 2016 Romers attended the screening.

“On a Thursday night, about 75 people showed up in their Sunday best to learn more about the army that protects the leader of the church we so love,” said Sarah Webster, BA ’18.

Webster admitted that she hadn’t originally planned to go to the screening, because there was a Lit Trad paper due the next day. But she decided to make time for it when she learned that the director, the producer and a member of the Swiss Guard would all be there, and she was very glad she did.

“I found the movie extremely informative as I knew very little about the Swiss Guard,” said Webster. “The Swiss Guards are incredibly faithful, hardworking and disciplined -- they are so willing to serve, and the movie also showed some of the challenges that are often overlooked by the general public. They spend hours in solitude, hours standing and hours sweating away in their famous colorful uniforms.”

Radovinovic took time afterward to answer many of the students’ questions about what it’s really like to be a Vatican Swiss Guard.

“The passion for his job was so clear,” said Webster. “He remembered fondly the first time the Pope looked at him and thanked him for his service.”

In fact, at Radovinovic’s invitation, some of the students went for a personal tour of the Swiss Guard barracks and the Vatican Gardens.

Webster, one of the attendees of this tour, said it ended up being one of the most memorable experiences of the semester for her.

As another follow-up to the on-campus event, students also visited Europe’s largest film studio, the Cinnecittà Studios in Rome, with Pannone as guide.

“Needless to say, I was really glad I decided to attend, and the late hours working on that Lit Trad paper were definitely worth it,” said Webster.