Student Employee of the Year

‘Wizard of Sound’ Awarded Student Employee of the Year 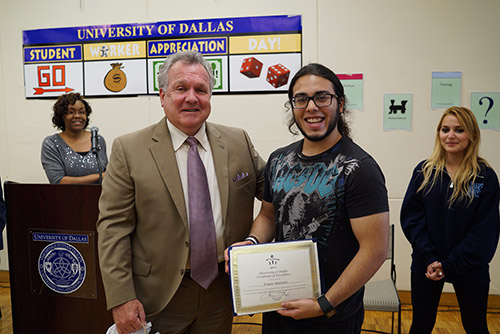 Nicknamed the “Wizard of Sound” in the scene shop of the Margaret Jonsson Theater, senior Evyan Melendez first started working in the Drama Department in 2012 as their sound engineer. Over the last four years, Melendez has been responsible for engineering the sound in almost a dozen mainstage plays for the university’s theater productions; recently, he was named the student employee of the 2015-2016 academic year for the entire university.

But before Melendez was living in Texas and attending UD, he was studying in Puerto Rico.

At a college fair when he was a senior in high school, Melendez met a University of Dallas international admissions counselor, who gave him assurance and details about UD’s phenomenology study in psychology. Melendez was immediately drawn in.

“She warned me that it was extremely academically rigorous, and I was sold on the challenge,” said Melendez.

Melendez struggled with the cultural change and move at first. His English was broken and choppy, and his studies suffered until he became more fluent and comfortable with his English. “Aristotle means nothing if you can't read him,” said Melendez.

Melendez still misses what he used to call home. He remembers his mother and grandmother fondly. “My mother always said, ‘I don't care what career you end up choosing, but whatever it is, just be the best one at it,’” recalled Melendez.

Melendez’s mother and grandfather both still live in Puerto Rico; they help him pay for school and travel during the summer and winter breaks so he can visit home.

Last week, Melendez was awarded the student employee of the year. Melendez’s mother was elated to hear her son had been honored with this award for his hard work.

“I felt so fulfilled at my job,” he continued. “I just felt so honored, I was remised, I was without words.”

After graduation, Melendez is going for his doctorate in music-thanatology.

“I want to focus on research, and grief, and helping actively dying people overcome the anxiety and pain of their imminent mortality,” he said.

Melendez will never forget the joy of working in the Drama Department. He will carry his UD experience with him everywhere he goes. He will always cherish the opportunities he’s been given at UD, and he will always love the theater.

“I think it’s the magic of the theater. You sort of work so hard on making something look beautiful to tell a story with art,” said Melendez. “All you take away is what you did, because nothing will remain standing.”