4 Major Emotions of War and Peace in the Middle Ages 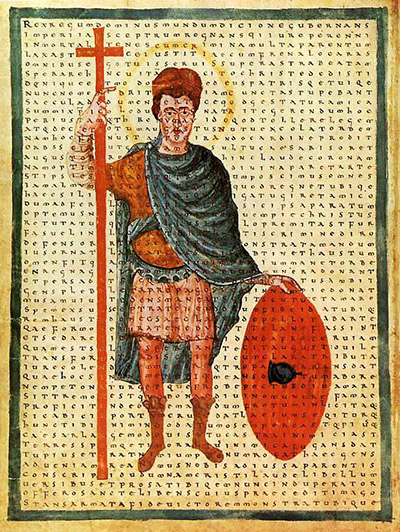 According to Assistant Professor of History Kelly Gibson, early medieval writers gave lessons on how one should feel by describing the good emotions of good people and the bad emotions of bad people. These authors were usually close to their rulers, so their writings reflected current political ideals and could have influenced political practices. They recorded history in a way that flattered their rulers, so the emotions ascribed to these rulers in these writings must be viewed as paragons and perhaps not accurate representations of how these people actually behaved all of the time.

“For example, Einhard's Life of Charlemagne highlights Charlemagne's patience and does not portray him as angry, although he may have been angry,” said Gibson. “This source illustrates a change in the acceptability of royal anger in the later eighth century. In contrast to sources from the early eighth century, which describe lots of angry kings, sources from the later eighth century through much of the ninth century generally omit the Carolingian ruler's anger. Some authors working during this time copied earlier histories but left out that the king was angry.”

“Pride went hand in hand with anger as one of the two big emotions of disorder; patience and humility were the opposites of these and could check them,” said Gibson.

Carolingian-era authors, usually monks and clerics, read and wrote biblical commentaries as well as histories, using Scripture and earlier commentaries to understand the conflicts of their own time. They tended to start at the beginning, with the Book of Genesis, and work through the books, paying special attention to “first conflicts”: the first conflict between good and evil, the first conflict between brothers. The story of Cain and Abel, for example, illustrated the emotions that led to conflict: Cain killed Abel out of anger, greed, jealousy and pride.

In contrast to largely emotionless Carolingian rulers, their enemies have the same emotions that characterized Cain in biblical commentaries. Historians describing rebellions against the king consistently ascribed anger (particularly wild rage, sometimes verging on insanity or perhaps demonic possession), fear, greed and pride to the rebels. Scholars also applied these negative emotions to enemies of the church, accusing heretics of anger and pride in the treatises that refuted their ideas. Anger caused disorder not only in one's mind but in society, church and kingdom at large.

On the other hand, love — especially of God or of one’s brother — created social bonds that led to peace, and acting in loving or peaceful ways led to joy. At the same time that anger became a less acceptable emotion in rulers, the joy of military conquest and the treasures obtained through war shifted instead to emphasize joy from peacemaking. If Charlemagne, for example, handled a situation in a peaceful way, he would return home happy. Joy also came from religious festivals and from seeing one’s family.

Because clergy were often the authors of these histories, they perhaps also became the basis of sermons for laypeople, adapted from the original Latin and forming a broader pastoral program. However, they also addressed the war leaders of the world: kings and their followers.

“People tend to think of the Middle Ages as violent, and there were a lot of wars, but there were also attempts to encourage certain emotions that would create peace and harmony,” said Gibson.