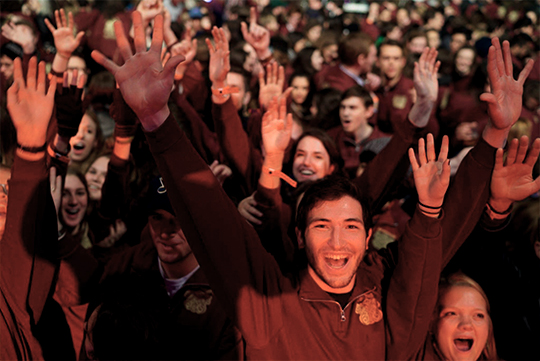 Whether or not the wood-chucking mighty marmot finds his shadow this Groundhog Day, first-time UD Groundhog-ers will be forever changed — for better or worse — having tread through the mud, chapped by the wintry weather and smelling like a bonfire. Considered a rite of passage for nearly every undergrad, the University of Dallas’s university-wide Groundhog celebration, which started 54 years ago, is thought to be the second-largest of its kind in the United States.

In preparation for this year’s Groundhog, we gathered this collection of marmot-inspired memories and stories to share with the greater UD community. From the taxidermy groundhog, Phil, to the great monsoon of the early 2000s, there’s an endless supply where these came from. Whether this is your first or 20th Groundhog celebration, these stories (in no particular order) will help inspire and ensure this UD tradition is kept alive for many more Groundhogs yet to come.

"I remember once when a monsoon plowed through the party. We all huddled shoulder-to-shoulder around the campfire, shivering, soaked to the bone, being all hardcore. Until we gave up. Then two other girls and I tried to go back to our dorms, and for some reason we were locked out (don't remember why), so we wound up going to a friend's apartment. They lent us clothes that were huge on us while we tossed our soaked clothes in the dryer. They also gave us Vicks Vapor Rub and hot chocolate; it was really sweet."

"Part one of the plan worked to perfection: I placed a black bow-tie on Phil’s noble neck, carried him to the park, and told the gatekeepers that I was not going to pay since I had an actual groundhog with me. Stunned by the power inherent in the body of the mighty marmot, they were hushed, and waved me forward with a solemn bow of their heads in Phil’s direction."

— Fr. Thomas Esposito, BA ’05, who took his prized taxidermy groundhog, Phil, to Party in the Park, gained admission without having to pay, and then attempted to have Phil crowned the rightful Groundhog King (Originally published in “The End of UD Ignorance: My Life with the Real Groundhog” in Avant Guard 2016)

"We committed the most heinous act of putting a hay bale in the fire, because we were trying to create warmth in sub-freezing temperatures. Campus Safety told us it was going to explode and that we knew better."

“Our spring Rome semester, we held Groundhog in the ruins of Mussolini's mistress' villa, a building that had been bombed out during the war and still reached up three stories. In the tradition of the day, we went out to the ruins around 4 a.m. My group of friends had gone into Rome during the week and rented a bear costume. (This was the closest thing we could find to a groundhog, which we later found out is called a marmotta.) Pat Thoresen, BA ’84, put on the bear costume and came out to the crowd right as the sun came up (that's at least my memory). Jim Fougerousse, BA ’67, (before becoming director of UD’s Rome Program) had joined us for the early morning festivities. Mike Luft, BA ’84, a Coke-totaler who had brought a case of old Coke (the best part of the Rome semester was finding that Europe still sold old Coke when the U.S. had switched to new Coke). Ramped up on caffeine and sugar, he scrambled his way among the steel rafters like Spiderman all the way up to the third floor of the villa. In an eerie case of foreshadowing, Steve Lowke, BA ’85 MA ’95, lumbered up behind Mike, reaching the second floor, but came down after all of us called out to him not to endanger himself. We returned to campus by 8 a.m. for what was supposed to be a lovely surprise of an American breakfast with scrambled eggs and bacon, though the runny eggs cooked in olive oil and the Italian pancetta were a disappointing and pallid comparison to Denny's. Though this Groundhog was a more intimate affair than the Irving event, it nevertheless participated thoroughly in the Platonic ideal of Groundhog Day.”

“I was a student from 1990-94. I’m not sure exactly what year it was (possibly ’92). My most memorable experience was when my roommate’s boyfriend got his foot run over by the Groundhog bus. He was in a cast for a while, but he sustained no long-term damage. By the way, two of his kids are now undergraduates at UD.”

Create new Groundhog memories and attend the 54th Groundhog Party in the Park from 8 p.m. until midnight this Saturday, Feb 4. on Madonna Hall Field.

For those who’ve already experienced UD’s marmot-inspired holiday and celebration, what are some of your favorite memories? Share your memories on UD’s Facebook and Twitter accounts.