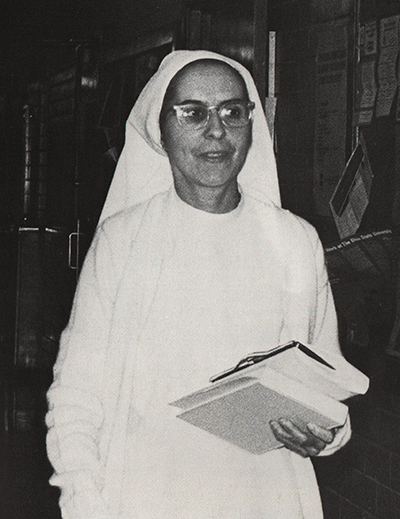 Founding University of Dallas English faculty member Sister Cecile Faget of the Sisters of St. Mary of Namur — the order of nuns who was the impetus for the University of Dallas — was celebrated and remembered at her funeral service yesterday, passing away last week at the age of 93, after a lifetime of teaching, ministry and service to the church. By her UD colleagues and students, she was revered as a “deeply holy, profoundly human friend of the university.”

Sister Cecile joined the English faculty in 1958, a year before Donald (former UD president) and Louise Cowan would arrive at the university, and taught at UD for more than a decade. As one of the founding English faculty members, Sister Cecile worked alongside the late former English Department chairwoman Louise Cowan to gather readings that would form the Literary Tradition four-semester sequence, which serves as an integral part of UD’s Core curriculum.

“Sister Cecile was a treasure, full of wit, charm, keen intelligence, and, when necessary, pepper,” said Dan Luby, MA ’77, affiliate assistant professor of theology in the Ann & Joe O. Neuhoff School of Ministry, who arrived at UD in 1972 as a graduate student and admission counselor. “Her connection to UD was very important to her even though she had not been on the faculty for decades. She loved the vision of the university, was a devoted fan of the Cowans and was always eager for news of old colleagues and new initiatives.”

Her colleagues knew Sister Cecile as an avid reader and editor for all types of writing. “Whatever it was — a memo, a policy manual, a poem, a prayer — she read with deep respect and a sharp pencil,” said Luby, who would often give his writing to Sister Cecile for her keen editorial eyes.

“I'm still working on it, but I aspire to be that kind of reader for my students,” said Luby.

The daughter of a professional cellist, Sister Cecile and her family moved from New Orleans to Dallas when her father joined the Dallas Symphony. She studied at St. Edward’s Academy, where she first became acquainted with the Sisters of St. Mary of Namur at 10 years of age. In her mid-20s, she entered the sisters’ novitiate in Fort Worth and made her first vows, entering perpetual profession in 1952 and serving her order for seven decades.

Sister Cecile taught at schools throughout Texas. After leaving UD in 1971, she worked for a number of pastoral ministries with the Archdiocese of Galveston-Houston, St. Francis of Assisi Parish in Abilene, Our Lady of Guadalupe Parish in Houston, the Diocese of Fort Worth and others.

In 1995, Sister Cecile traveled to Africa to help the order’s missionary sisters after the Rwandan genocide. She also went on mission assignments to Peru, Mexico and the Dominican Republic.

Judy French Kelly, BA ’63, professor emerita of drama and former Drama Department chairwoman, recalls being an English student of Sister Cecile (then known as Sister Mary Ignatius) at Our Lady of Victory Academy in Fort Worth (where Sister Cecile taught alongside the late Sister St. John Begnaud, SSMN, also a founding UD English faculty member) and a simple spelling trick the sister once taught her: “A friEND remains ’til the END.”

Kelly would go on to study at UD, where she served as a student “guinea pig” while the Core curriculum was being formed.

“Dr. Louise Cowan always talked about how Sister Cecile and Sister St. John supported the new Core curriculum at a time when most male English faculty members were still against it,” said Kelly. “These women were heroes to me, mentors who guided me to UD and became my colleagues. They could always be counted upon for devotion to students, hard work and inspiration.”

In this first week of February, Sister Cecile's family, friends, colleagues and former students, including members of UD's first graduating class, gathered for her vigil and funeral. In her memory, they prayed her favorite prayer:

Remember, O most gracious Virgin Mary, that never was it known that anyone who fled to thy protection, implored thy help, or sought thine intercession was left unaided.

Inspired by this confidence,

I fly unto thee, O Virgin of virgins, my mother; to thee do I come, before thee I stand, sinful and sorrowful. O Mother of the Word Incarnate, despise not my petitions, but in thy mercy hear and answer me.