A Labor of Love

A Labor of Love: Alumnus Gives Back to Sicilian Town 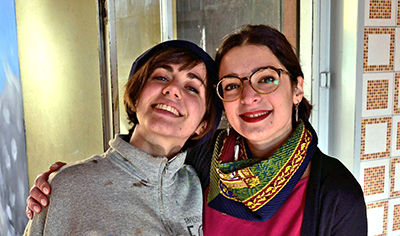 University of Dallas alumni develop a lifelong love of Italy after their time spent there during the Rome semester. Some alumni are drawn further into Italian culture through experiences completely external to their Rome semesters.

One such alumnus is Dave Atkinson, BS ’99, spring Rome ’97, who lives in Dallas and works at Children’s Health.

For a couple of years now, Atkinson has had a strong tie to the quaint mountain town of Prizzi in Sicily. He was first drawn there in 2015 for the famous Ballo dei Diavoli Easter celebration.

“I saw it in a book,” Atkinson recalled, “and decided to be bold and do something I had never done before.”

He was struck by how different this Sicilian celebration was from those in the U.S. Of the main celebration beginning on the morning of Easter Sunday, Atkinson said, “[I]t's just so foreign to all of what I thought was proper to ‘religious observance’ in America … I was exhilarated when I saw the Incontro between Jesus and Mary, where the black mantle of the Madonna Addolarata is taken away as Jesus forces Death and the Devils to submit, and the Virgin is revealed to be wearing her bright blue mantle underneath at the moment she sees her Son. It's good theater and good theology, all told through traditional imagery that binds the town with its rich historical past.”

During this visit in 2015, the locals of Prizzi embraced Atkinson and became his great friends very quickly. He was pulled deeper and deeper into these friendships and into the culture of Prizzi, so much so that he felt inspired to give back to the local community in some way. He wanted to do something that would “[build] culture from the ground up,” he said.

Atkinson shared three ideas for projects with the mayor of Prizzi, and the idea that ultimately came to fruition was a mural project, reminiscent of another mural project that had taken place in Prizzi in the 1980s.

“Art can help people create common bonds, and it can help them appreciate the value of the things that are ‘valorized’ in the art,” Atkinson said. “The project also gave the people faith that they could do something. This is the most important aspect of a successful culture: faith in the ability of others to work with us to make our lives better. It’s at the basis of a successful church, university, town or nation.”

Atkinson also noted how his UD education, particularly the Core curriculum, played a role in the creation of the project:

“Believe it or not, being forced to read Alexis de Tocqueville led me to appreciate this lesson. The UD Core curriculum helped me place this idea of an art project into the context of what it could really do for the town and the region.”

“I chose murals in particular,” he continued, “because I actually thought that [Prizzi’s] existing murals were great, and the townspeople revered them … and I thought it would be nice if there were more — first, to emphasize the beauty of the place and its history, and if there were more high quality murals, then it could become a town known for its murals.”

Atkinson invited three Dallas artists — fellow UD graduate Olivia Cole, BA ’14, Maria Haag and Frank Campagna — to Prizzi to paint three different murals that would reflect the Prizzese culture. The project began during Holy Week of this year, which enabled the artists to be touched and inspired by the same Easter traditions that had first ignited Atkinson’s love for the town.

UD alumna Cole, being able to take part in these unique Easter celebrations had a special effect on her. She described it as a “transformative” experience. “My body was involved in prayer all the time,” she reflected.

For the artists, the trip was paid for entirely. The city of Prizzi covered the art supplies and many of their meals, and Atkinson worked with local business owners to establish housing arrangements. The artists dedicated their time to one mural each, and each mural spoke to a specific element of Prizzi’s culture:

Cole, Haag and Campagna worked for a total of 10-12 days, beginning the Tuesday after Easter. Cole said that she would paint for about six to eight hours per day. She noted that the locals would stop and admire the unfinished pieces constantly.

“The most difficult thing for me was having the painting exposed at every stage,” admitted Cole, whose mural was painted at a busy bus stop in the center of town.

“It was wonderful that I was able to pull in artists from various backgrounds who could emphasize both the secular and religious great things that the island stands for,” said Atkinson. “I am so grateful to the artists, because without them working their tails off, and without their talent, this would not have been a success.”

As a major part of the project, Atkinson partnered with Italian filmmaker Luca Vullo, whom he met during Vullo’s lecture at UD in January of this year, to make a documentary of the mural project. Vullo captured the project in all of its stages, and the film will premiere first in Sicily and then in Dallas.

When the murals were finished and presented to the public, the reception was overwhelming. Since then, Sicilian media channels have posted articles and news clips about the “Dallas in Prizzi” project, clearly showing their pride for the newest murals in Prizzi.

“To have facilitated this project means the world to me,” said Atkinson. “First, for the Sicilian people in general, that they have something that helps them identify their strength and beauty. Second, for the people of Prizzi: I feel like I gave something back to them that reflected the positive and warm feelings that they’ve given me over the past two years.”

Cole noted this feeling, too: “[The project] was absolutely born of love; it was a labor of love for sure.”

To learn more about the “Dallas in Prizzi” project, you can visit the project’s dedicated page on Facebook.