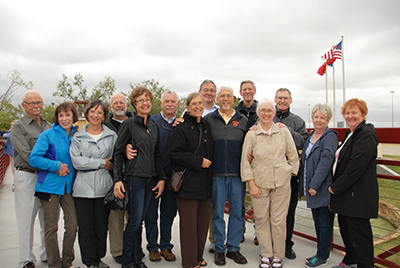 Even the late University Professor Louise Cowan once remarked upon the exceptional closeness of the Class of 1970 (of which her own son, Bainard Cowan, was a member). Ann (Lang) Ellis can corroborate this claim.

“We all get together once a year now,” she said. “We haven’t always done this — not when many of us were busy with young families, for example — but we’ve always kept up with each other even when we’re busy.”

Ellis herself came to the University of Dallas from Houston because of the generous scholarship she received. The friendships and sense of community developed in her years here, from her freshman year living in Madonna Hall through the subsequent three years serving as an R.A. (what was then known as a “proctor”), have remained with her ever since.

“You carry all of that with you to other communities you become a part of,” she said. “It’s amazing how the University of Dallas just stays with you. It’s more than a school you went to; it’s a part of you throughout your life.”

Her UD education served Ellis well in law school and throughout her career as a probate attorney; in fact, she believes there could have been no better preparation than the writing, reading and critical thinking skills acquired here.

Ellis and her husband, Billie, himself a sort of “adopted” UD alumnus, have contributed to the Cardinal Farrell Hall campaign and hope that others will consider doing the same.

“I know my classmates and I have always felt so fortunate to have been able to spend four years (or longer) at UD,” Ellis said. “And I think it’s time for new buildings. New buildings were being built when we were there, and that was a very long time ago. It’s time.”