Chemistry and the Humanities 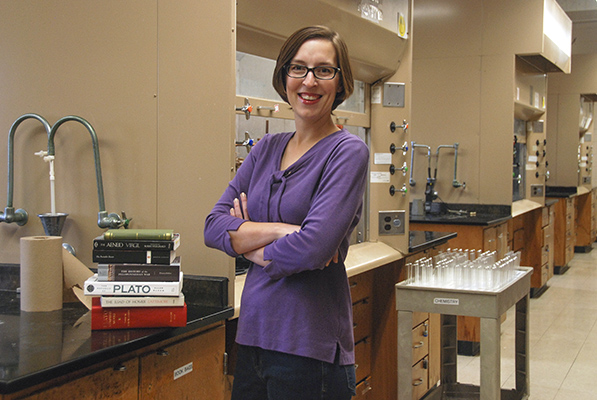 In October, we published this story about science and mathematics as liberal arts and as part of our Core curriculum. Then, we asked some alumni what they thought about this concept. Here’s one response.

Kathryn Kloepper, BS ’03, knew early on that she would study chemistry in college. Initially in her college search, she looked at schools that concentrated on the sciences and had minimal humanities requirements. However, her humanities teachers at her math/science magnet high school, the Alabama School of Math and Science, provided an introduction to language, literature and philosophy that inspired her to shift her focus to small liberal arts universities.

Kloepper was drawn to UD because of the Core curriculum.

“I knew at the time that I’d never pick up Kant on my own instead of a chemistry text, and this place was going to make me take not one, but four philosophy courses?” said Kloepper.

Kloepper visited UD overnight in the fall of her senior year of high school, and the visit sold her. Her campus host, Anjeanette Stokes, BA ’02, took her along to a midnight movie with some friends; when they returned, Stokes stayed up for another hour working on a draft of a paper not due for another week.

“I knew I’d found a place for serious students,” said Kloepper. “I withdrew my other applications and committed to UD.”

In graduate school at the University of Illinois, Kloepper did not have the specialized chemistry coursework of some of her peers who had not attended liberal arts schools and who had chosen to take graduate-level chemistry courses as undergraduates. What she did have, however, was the instilled confidence that her ideas mattered.

“The Core helped me tremendously in graduate school,” said Kloepper. “I could speak and write well, and I knew I could tackle any new concept in the chemical literature — after all, I (sort of) made it through the writings of Heidegger, Plotinus and Thucydides.”

Great Books faculty are also self-selected, training in each course the year before teaching it by sitting in on the entire class; often the 18-student classes include one or more faculty members in addition to the facilitator. Kloepper has regularly taught the second course in the sequence, which includes Plato’s Republic, Euclid’s Elements, Nicomachean Ethics and the Aeneid. This year, she also taught the sophomore fall course, which includes Augustine’s Confessions, excerpts from the Old and New Testaments, and readings from Aquinas.

“If you’d told my 18-year-old self that one day I’d be facilitating discussions on the Summa, I never would have believed you,” said Kloepper. “I honestly feel so privileged to help our students gain an introduction to these foundational texts. Teaching in the Great Books sequence makes me a better teacher in all of my courses. I bring small-group practices from my chemistry courses to my Great Books classes, and I bring an increased awareness of student understanding of material back to my chemistry courses.”

The Great Books faculty rotate three-year terms as program director. This past year, Kloepper experienced a particularly memorable moment because of this role. Mercer’s Great Books Program was a co-sponsor of the 22nd Annual Conference of the Association for Core Texts and Courses (ACTC) in April 2016, so Kloepper helped organize the conference, where UD had a strong presence. She was thereby able to meet many current Braniff Graduate School of Liberal Arts students. Additionally, she reconnected with Seemee Ali, PhD ’01, who taught her Literary Traditions I and II once upon a time, during her freshman year at UD.

“Her encouragement and passion for the texts and teaching greatly influenced me back then as a student and do so even now teacher, and it was such a blessing to reconnect with her after all these years,” said Kloepper.

UD is a co-sponsor of the 2017 ACTC conference, and Kloepper looks forward to seeing everyone in Dallas in April.