UD to Welcome One of Catholic Church’s Most Unifying Figures 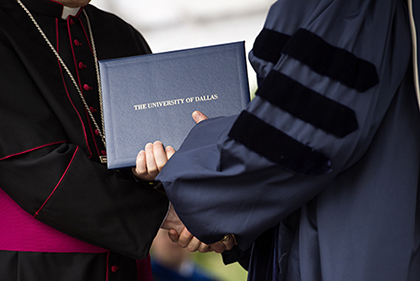 The Most Rev. Wilton D. Gregory, archbishop of Atlanta and the first African-American to preside over the United States Conference of Catholic Bishops (USCCB), will address the University of Dallas Class of 2017 during its annual commencement exercises for the Constantin College of Liberal Arts, the Braniff Graduate School of Liberal Arts, the Ann & Joe O. Neuhoff School of Ministry and undergraduates of the Satish & Yasmin Gupta College of Business. The ceremony will begin at 9 a.m. on Sunday, May 14, on the Braniff Mall.

For his leadership, service to the church and mission to build unity and dialogue, the University of Dallas will award Archbishop Gregory an honorary degree of Doctor of Humane Letters.

“During a time of much uncertainty and divide, Archbishop Gregory has built bridges across ethnicities and classes, and within the Catholic Church, which is vital for the success and unity of future generations,” said University of Dallas Provost C.W. Eaker. “He is one of the Catholic Church’s more influential clergymen in the United States, and we are extremely blessed to welcome him as this year’s commencement speaker.”

In July, Archbishop Gregory was appointed chairman of a new USCCB task force to deal with racial issues following a series of summertime shootings. One such incident that grabbed national headlines occurred at a march against police brutality when a lone gunman ambushed and killed a group of Dallas police.

Archbishop Gregory converted to Catholicism at 11 years old with the aspiration of one day becoming a priest. In 1973, he was ordained a priest for the Archdiocese of Chicago, and three years after his ordination, he began studying at the Pontifical Liturgical Institute (Sant’ Anselmo) in Rome, where he earned a doctorate in sacred liturgy in 1980.

He became the youngest bishop in the United States at age 35, serving as the auxiliary bishop of Chicago for 10 years. In 1994, he became the seventh bishop of the Diocese of Belleville (Illinois), where he served for nearly a decade.

As bishop, Gregory served as vice president of the USCCB for three years. In 2001, he was elected to a three-year term as the conference’s first African-American president.

In 2004, Pope St. John Paul II appointed then-Bishop Gregory as the sixth archbishop of the Archdiocese of Atlanta, where he still serves today.