‘One of the Fundamental Forces in Nature’ 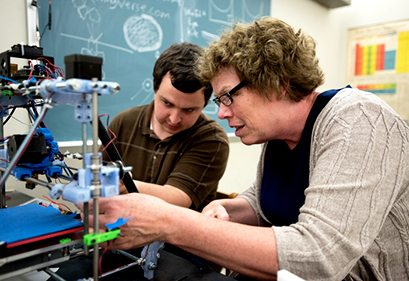 The sun has been producing light for nearly five billion years, but where does its energy come from? As the mathematician and astronomer Nicolaus Copernicus first suggested, the sun rules the center of our solar system with a gravitational iron fist. Scientists since Copernicus have discovered that nuclear reactions in the sun’s core generate energy to produce the light we see; those same reactions enable the production of elements in our universe that are heavier than hydrogen.

Studying the core of this natural phenomenon is Sherry Yennello, professor of chemistry, nuclear science chair and director of the Cyclotron Institute at Texas A&M University, one of the leading university acceleratory laboratories in the United States. “I’m looking forward to my visit to the University of Dallas next week,” said Yennello, who will join us on Tuesday, Oct. 10, for the annual Clare Boothe Luce Lecture Series at 5 p.m. in the SB Hall Serafy Special Events Room

“I hope that through my Clare Boothe Lecture, I can inspire some of the students at UD to wonder a bit why the world works as it does, and how they could play a part in exploring the frontiers of knowledge,” she continued.

“This is our fifth Clare Boothe Luce Lecture in the last three years,” said Professor of Physics and Department Chairwoman Sally Hicks. “Dr. Yennello is presenting just a piece of an important puzzle; she studies these reactions in a lab and helps us understand the formation of certain nuclei in stars. In doing this, we are able to develop a better understanding of one of the fundamental forces in nature — the nuclear force.”

Nuclear reactions, though, occur at times and scales that pose unique challenges to scientists. “On Earth, our best means of studying these stellar processes is in an accelerator laboratory,” explained Hicks. “Accelerators are used to give energy to particles and collide them with other particles. The temperatures and pressures involved are as close to stellar environments as we can have on Earth.”

The sun accounts for 99.8 percent of all mass in our entire solar system. Ninety-three million miles from Earth, inside the sun’s core, hydrogen atoms are fused together under crushing pressure and extreme temperatures to create helium. This fusion process converts mass into energy, which scientists measure using Albert Einstein's Theory of Relativity (E=MC2).

“If you want to be amazed by nature in any way, then understanding nucleosynthesis is one of those things that is just downright awe-inspiring,” said Hicks. “Also, if you talk to any UD student who has had a Research Experience for Undergraduates (REU) at Texas A&M, you’ll find them singing praises of Dr. Yennello.”

In the past few years, several UD undergraduates have participated in the Cyclotron Institute summer research program, in conjunction with the National Science Foundation, at Texas A&M. The program groups together 10 students with 10 research advisers who also serve as faculty at the university. This past summer, senior Matthew Nickel, BS ’18 (physics and math), was one of these students, taking part in the Cyclotron Institute REU to help fulfill his undergraduate research requirement at UD. His group’s research was titled "Event-by-Event Simulations of Early Gluon Fields in High Energy Nuclear Collisions."

Nickel first met Yennello last year at the Conference on Application of Accelerators in Research and Industry (CAARI) in Fort Worth. "Dr. Yennello has retained a curiosity and joy of learning that began with her interest in science. The fact that she retained those traits throughout her career is something I hope to be true of me too," he said.

“The Cyclotron Institute REU was a wonderful opportunity that steered me toward my present career in particle physics,” said Will Flanagan, assistant professor of physics at UD and another alumnus of the research program. After participating in the Cyclotron Institute REU in the summer of 2008, Flanagan became fascinated with the connection between cosmology and particle physics. “The Texas A&M Cyclotron, which Dr. Yennello directs, does meaningful research on everything from simulating nuclear production in exploding stars to making sure satellites function properly in space.”

“Dr. Yennello loves physics and students, and she has an enthusiasm for her research that always makes me excited to hear her speak,” said Hicks.

Have more questions after the lecture? Join Yennello on Wednesday, Oct. 11, from 7:30-9 a.m., for an open breakfast Q&A in the Haggar Cafe.