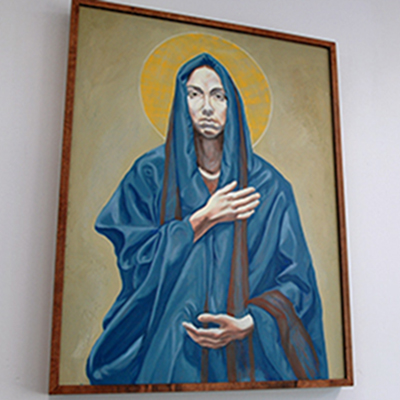 Originally conceived by the Class of 2012 as their senior class gift to the university, a painting of a saint for each of UD’s seven residence halls was a project finally realized by Alex Taylor, BA ’15, who was a freshman when the members of the gifting class were seniors.

“During our time at UD, we studied and tried to comprehend the true, the good and the beautiful,” said Kevin Burns, BA ’12, who was a member of the senior committee that guided both the vision and the fundraising for the gift. “I think our class hoped that we could give something beautiful to the campus to show that maybe, just maybe, we actually learned something about goodness and beauty.”

The Class of 2012 raised approximately $5,000 for the paintings, but the project only reached fruition this year. Taylor, discovering the incompletion in the midst of his Student Government work his junior year, decided to remedy the situation. He set out to find the artists (two of whom ended up being alumni) best suited to the project and commission the paintings. Peter Bloch, BA ’09, painted Saints Gregory and Jerome for their corresponding residence halls as well as “Christ the Light of the World” for Clark Hall; Johnny Defilippis, BA ’15, painted St. Augustine for Augustine Hall, Our Lady of Sorrows for Madonna Hall and St. Therese of Lisieux for Theresa Hall (which was also named for St. Teresa of Avila); and “Life of the Virgin Mary” for O’Connell Hall was done by Roxolana Luczakowsky Armstrong, who is not a UD alumna but was once Associate Professor of History Susan Hanssen’s art teacher.

"The icon of Mary is in the tradition of celebrating Our Lady by depicting various scenes from her life,” said Armstrong. “It should be instructional and inspirational, an aid to prayer."

“My inspirations for these three portraits where El Greco, Marianne Stokes and Lawrence S. Harris,” said Defilippis. “El Greco: I take his eyes and the way he has that lets you see into their souls simply by the expression. Marianne Stokes: I was deeply influenced by her composition. Lawrence S. Harris has been a huge inspiration for color and gradation, as all the Group of Seven artists have been. These three artists describe my style quite well.”

Defilippis’ process begins with drawings, then stencil, then transferring this onto the canvas or wood panel. He uses indirect painting, which involves many layers of transparent painting, beginning with an underpainting that is glazed over approximately 15-30 times.

“The whole point of indirect painting is to capture the light,” explained Defilippis. “Since there are transparent layers, the light can travel through each layer, so this then has the light travel that much longer through the painting, which transforms the colors into an almost mysterious hue. This process is very long and complicated, since you also have to change out what oils you mix with each level of layers. I am fascinated with it and hope that one day I can master it.”

Defilippis has also always been inspired by live drama, as he grew up doing one-man shows on the Gospels and saints with his parents.

“This allowed me to witness powerful pieces that truly awaken the soul,” said Defilippis. “It’s my desire to have someone stop, maybe even with fright, and be moved.”

According to Bloch, his artistic education truly began at UD, so once Taylor proposed the idea of the paintings to him, he was immediately interested and excited by the opportunity to give back to the university, push his artistic skills to new limits, and produce something beautiful for the campus.

“While the style of art on campus tends toward abstraction and conceptual design, I chose to work in a contemporary representational style,” said Bloch. “I love the drama and lighting in Caravaggio's work, so I took a lot of inspiration from him, as well as artists like Velazquez. I wanted the focus to be on the saints, and so I tried to obscure the backgrounds as much as possible. I wanted images of saints that college students could look at and relate to, which is why for example Saints Jerome and Gregory are both shown as young men at study.”

It took Bloch a whole summer to complete the paintings, as he spent approximately 60 hours on each from his first brainstorms to finishing and framing.

“I enjoyed every second of it,” he said.

Bloch worked in oil, using UD students and alumni as models. His process began with an underpainting of thinned-out burnt umber, to which he added thicker applications of paint in basic blocks of color. Once the painting was blocked in, he refined the parts until it was finished, working thin to thick and dark to light, adding highlights and details at the end.

“I built the frames from scratch using the same process Kim Owens taught me when I was studying painting with her at UD, and I credit her with getting me interested in Caravaggio to begin with,” said Bloch.

Beside each painting is a framed explanation of the work, done in calligraphy by Professor of English Scott Dupree. Taylor compiled the text for these “plaques,” which consists of the name and dates of the saint or the title of the painting, a quote from the saint, and a quote from one of Pope Emeritus Benedict XVI’s homilies, as well as “Donated by the Class of 2012,” the artist’s name, and “Commissioned by Alex Taylor, ’15.” Defilippis, who is also an experienced woodworker, made the frames for these, and Taylor took them home to Austin and stained them with the assistance of his dad and 12-year-old sister.

With leftover funds, Taylor also commissioned a painting for the Rathskeller, done by Defilippis: an original composition adapting “The School of Athens” and featuring G.K. Chesterton, Pope Emeritus Benedict XVI, Nietzsche and Father Roch Kereszty, O.Cist., all sitting around having a conversation — in the Rat.

“I want to extend a big thanks to the Class of 2012 for the opportunity to work on this project and to Alex Taylor for all the work he put into making it a reality,” said Bloch.

“Particularly through the religious nature of this art, we do hope that its beauty can constantly point beyond itself to The Truth it reflects,” said Burns.