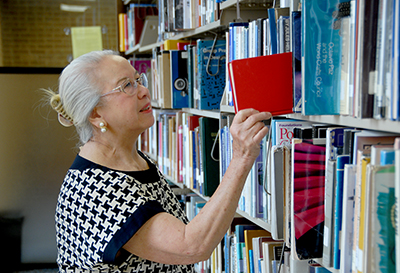 A native of Jakarta, Indonesia, the Cowan-Blakley Memorial Library’s cataloguing librarian Lely White met her husband, Kenneth, through his tennis mate. Kenneth, a geophysicist, took her around the world with him, to Africa, Asia and Europe — and finally back to his hometown of Irving, Texas.

“I was comfortable with the size of the population at UD, and it was only three miles from home,” explained White.

Also, she is no stranger to the Catholic intellectual tradition, having been educated at St. Vincentius Catholic School in Indonesia by Ursuline and Jesuit Dutch and Indonesian nuns and priests, who exposed her to the catechism and medieval world history and geography, including Alexander the Great, Archimedes, Galileo and Marco Polo; Amerigo Vespucci, who saw the American continent; and Columbus and Magellan, who sailed around the world to find the Spice Island, which is Indonesia.

During her travels with her husband prior to settling in Texas, she got to “step in those places” about which she had learned in these early studies.

“Through the life experience I gained in these countries, I could see the similarities of human beings — whatever race, we’re all just the same,” she said. “Additionally, this history of the human race is recorded in literature, in drama like Shakespeare — that’s why I’ve always been so attracted to libraries, because they house all of this information, which documents the history of the human race.”

Although White is not an alumna of UD, she has often helped UD during phonathons and considers herself “adopted” by UD’s alumni community. Her deep feeling of connection to the university led to the establishment, in 2015, of the Lely K. & Kenneth L. White Fund, of which the Cowan-Blakley Memorial Library is a beneficiary.

The Whites’ endowment is divided into two categories: the first is a restricted fund designated to providing a down payment for a new Integrated Library System (ILS), which supports cataloguing work, or renewing the subscription on an existing one. Beginning in 2018, this fund may distribute $1,500 each year for this purpose.

The second category is an unrestricted fund that will present the Lely K. and Kenneth L. White Library Student Award each year to a graduating student who has worked in the library. For Constantin students, they must have worked there for at least three years, including summer semesters, with no more than six days of absence.

For Satish & Yasmin Gupta College of Business students, they must have worked for at least four semesters, with no more than five days of absence, and have displayed exemplary character, courtesy and efficiency. Each student who meets this criteria is eligible for the $200 award. Wenjun Xu, MBA ’16, was the first recipient.

“My husband and I received scholarships to finish our first college degrees,” said White. “We were grateful to philanthropists who set up foundations or trusts for education. We agreed that if possible, we would return this gratitude and share it with the next generation.”

To set up an endowment of your own, contact Assistant Vice President of Advancement Elizabeth G. Murray at 972-721-5053 or emurray@udallas.edu.