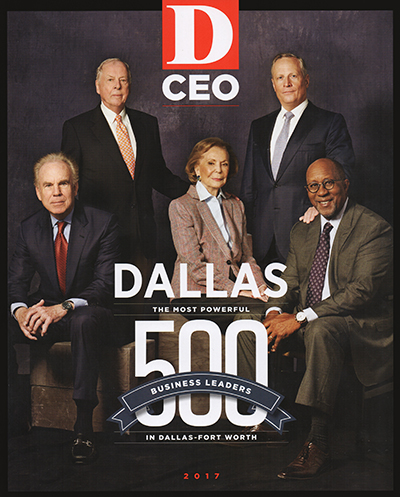 “Thomas Keefe has a unique charge for a leader: Achieve growth, but without sacrificing the benefits of being a small college. In the past five years, the private Catholic school he runs has seen record-breaking freshman classes and received a $12 million gift for a new business school, yet its student-faculty ratio is 10:1.”

This, according to D CEO magazine, is why University of Dallas President Thomas W. Keefe has been named to the Dallas 500, an annual list of Dallas/Fort Worth’s most powerful business leaders as determined by the publication’s editors.

Not only does the honor place him among 11 other college and university presidents and administrators, but it also places President Keefe alongside the likes of Exxon Mobil Chairman Rex Tillerson, who was recently confirmed as President Donald Trump’s secretary of state, Dallas Mayor Mike Rawlings, Dallas Cowboys Owner Jerry Jones and many others.

Several University of Dallas alumni were also included in the Dallas 500. They included Gary Blankenship, MBA ’83, chairman and CEO of the Bank of the West; Ellen Barker, MBA ’94, chief information officer of Texas Instruments; and Kyle Rogers, MBA ’11, risk manager of HollyFrontier. Former UD Board of Trustee member Margaret McDermott, BA ’69, who helped establish the endowment that would create the Eugene McDermott Lectureship, was named one of North Texas’ Living Legends, because of her extensive civic engagement and philanthropic endeavors.

D CEO editors made selections to the Dallas 500 based on extensive contacts in local business circles, hundreds of interviews and nearly a year’s worth of research. “In the end, 302 of the first-edition Dallas 500 were brought back for the second edition, and 198 are new this year.”