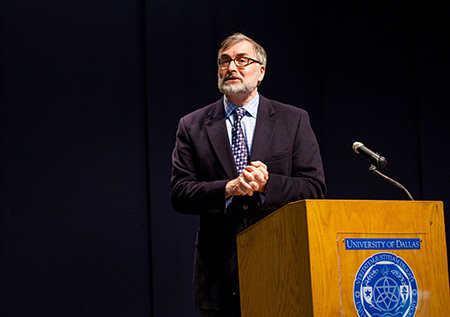 Producing medieval works never before translated into English, the series Dallas Medieval Texts and Translations, sponsored by the University of Dallas, recently published its two latest volumes. Pursued and edited by Professor of Philosophy Philipp W. Rosemann, the ambitious open-ended series — launched in 2002 — published both volume 22, “Waltharius,” which translates the medieval Latin epic poem of the Germanic hero Walter; and volume 13.2, “Ranulph Higden, Speculum Curatorum: A Mirror for Curates, Book II: The Capital Sins,” the second installment in a four-part series about how to run a parish and steer clear of sin. Now totaling 23 volumes, the medieval series covers everything from treatises on medieval theology and philosophy to Viking warfare and more.

Dallas Medieval Texts and Translations has attracted the attention of distinguished medievalists and prestigious universities from around the globe. The series’ translators come from institutions as diverse as St. Joseph’s College in Brooklyn, Ave Maria University, the University of Chicago and the University of Toronto. Several volumes have also appeared in graduate-level courses, such as volumes five and six of “Henry of Ghent’s Summa: The Questions on God's Unity and Simplicity.”

Rosemann first began working on Dallas Medieval Texts and Translations after joining the UD philosophy faculty in 1997. It was shortly thereafter — after discussing with Father James Lehrberger, associate professor of philosophy, the idea of a comprehensive series of Latin texts on medieval culture accompanied by English translations — that he began searching for a book publisher to take on the project.

He and Professor Emeritus of History John Sommerfeldt collaborated on forming a diverse internationally recognized board of academic scholars from across the United States and Europe. Currently, more than a dozen medievalists (including current UD faculty members) offer their critical insight and subject matter expertise to the editorial board on the series’ overall development.

In 2002, Peeters Publishing — an international scholarly publishing house based in Louvain, Belgium — published the first volume of Dallas Medieval Texts and Translations. (Coincidentally, Rosemann knew the Peeters family from the time he spent living in Belgium.) Since the series’ launch, Peeters has remained the sole publisher through a transatlantic partnership.

As Rosemann often tells his students: “When you read a text from a different historical period, it gives you the ability to understand yourself differently.”

Indeed, translations provide timeless life examples through different cultures, which can elevate any person’s cultural awareness. “That’s why when you read texts from 700, 800 or even a thousand years ago you are challenged to think differently, which in turn gives you different assumptions about life,” said Rosemann.

“But a translation is never able to capture an original text perfectly, because languages don’t match one-to-one, you have to approximate,” said Rosemann. “In many ways, reading a translation feels as though you’re meeting with the author through dialogue.”

The peer-reviewed Dallas Medieval Texts and Translations series is open to all subjects and genres of Latin texts published during the Middle Ages, between roughly A.D. 500 and 1500.

“The entire point of this series is so people who don’t know Latin will have access to these texts,” said Rosemann. “I want to keep the literary heritage of medieval Latin civilizations accessible to modern readers.”

“This is a legacy project for the University of Dallas, and I’m just currently taking care of it,” said Rosemann, who intends to get to volume 50 within the next 10 years, before passing his responsibilities on to a successor.

Learn of medieval philosophers — and read medieval translations — by enrolling in classes such as Ancient to Medieval Philosophy. Discover more about our Department of Philosophy.