'Sorrow and Mourning Flee Away'

Testifying Against the ‘Demonization of Migrants’ 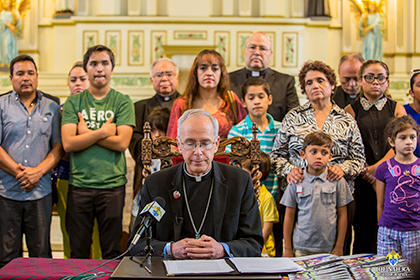 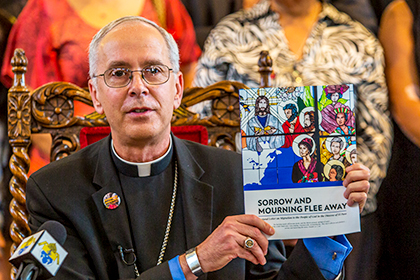 This article originally published in the 2018 winter edition of Tower magazine.

Standing on the edge of border America, Diocese of El Paso Bishop Mark J. Seitz, BA ’76, serves a role of vital importance as the pastor of a community divided by the United States-Mexico border. “Recently we have witnessed indefensible, hateful words toward our neighbors in Mexico, the demonization of migrants, and destructive language about our border,” Seitz wrote in his July pastoral letter titled “Sorrow and Mourning Flee Away,” earning him national attention amid significant upheaval of immigration rights.

Urged to share his reflections with the nation, Seitz called upon his parishioners and all Catholics to welcome their migrant neighbors into their communities. “Ours is a region that has from time immemorial seen the passage of people,” said Seitz.

Situated on the Rio Grande River in far West Texas, across the border from Ciudad Juarez, the El Paso metro area makes up one of the largest bilingual/binational workforces in the country — and more than a quarter of the total population in El Paso is in fact believed to be first-generation immigrants, according to Seitz. “Our families have many ties across the border. Our culture draws from the richness of Mexican culture, and our economies are deeply intertwined.”

As one of 10 bishops who grew in his discipleship with God after attending UD and going through formation in Holy Trinity Seminary, Seitz strengthened his own conviction for truth. “Life must be lived with integrity,” he said. “The truth is the ‘pearl of great price,’ which, once discovered, is worth everything I have.”

“It is my responsibility to speak the truth as I teach and act upon the truth as I serve. I trust that if I stay true to that calling, God will take care of the rest,” he added.

"I am pastor of a diocese divided by walls and checkpoints that separate individuals from loved ones. I am bishop of a flock frightened by the flashing lights of police cars in the rearview mirror, who wonder if this family outing or that drive home from work will be the last," wrote Seitz. "I am [a] spiritual father to thousands of Border Patrol and ICE agents, who put their lives on the line to stem the flow of weapons and drugs and those who carry them.”

In his letter, Seitz shared the story of Carlos Gutierrez, who fled his hometown of Chihuahua, Mexico, with his family, seeking asylum in the United States after a local narcotrafficking gang chopped off both of his legs. Although it’s been years, Gutierrez and his family have yet to receive asylum, raising the question of what indignities one must suffer to gain any sort of protection.

“The church does not treat human dignity as though it were a pie that can be divided,” said Seitz, who remains grounded in his faith. “I’m not substituting politics for the teaching of the church.”

As a pastor to many, Seitz preaches the Gospel of Jesus Christ according to church teaching. “The Gospels are full of examples,” he said. “We read his words in Matthew 25: ‘I was a stranger and you welcomed me.’”

“The church calls us to respect the dignity of every human person that God calls to life, from the first moment of their conception until their last breath, and we know that the beauty of this teaching is in its consistency,” he continued.

“Still migrants are treated, as Pope Francis says, as ‘pawns on the chessboard of humanity,’” wrote Seitz. “Their labor and talents are exploited, but they are denied the protections of the law and are scapegoated for our social and economic ills.”

At St. Peter’s Square in Rome, Pope Francis himself recently responded to the alienation of migrants by launching a two-year “Share the Journey” campaign, sponsored by Carnitas International, in support of immigrants and refugees around the world.

Seitz witnessed firsthand the hardships facing his parishioners following the crackdown on “sanctuary cities” with the passage of Texas Senate Bill 4 in May. After pledging his solidarity, Seitz established the Soñador Fund to offer financial assistance to children of migrant families so they can attend Catholic schools in the El Paso Diocese.

“Every community has the same opportunity to be enriched by the presence of the stranger,” said Seitz. For this to happen, though, we need to move beyond the exclusion of others and “the tendency to live in our own isolated ‘ghettos,’” which begins with opening up our communities to others and welcoming them within our cultures.

As Seitz explained, we need to open our minds and hearts to hear the stories of migrants, so that we may “recognize their faces.” “Only when we have overcome false narratives and come to know immigrants in this way will we truly be prepared to address the challenging questions of legislation regarding immigrants and refugees,” he said.

“Although we on the border are far from perfect,” continued Seitz, “I see our community made up of such a dynamic mix of people, as a model that could be helpful to others. We show that the presence of immigrants is not a threat but can in fact be the basis for a rich encounter.”