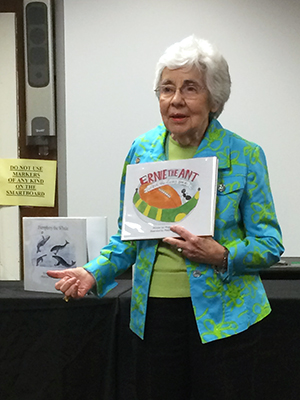 Born on Nov. 28, 1930, Professor Emerita of Education Cherie Clodfelter passed away on March 4, 2017. She will be deeply missed by the UD community.

The following story was originally published on July 27, 2016.

The daughter of the superintendent of schools in Bartlesville, Oklahoma, Professor Emerita of Education Cherie Clodfelter learned from an early age to value teachers.

“Teachers are the most powerful people on earth,” she said. “Even more than mothers, they affect eternity through the children and young people they influence.”

As a young woman, Clodfelter was a pianist and organist; she went to Oklahoma State University (OSU) on a music scholarship, which she lost when she broke multiple fingers and could no longer play. She then moved on to her true love, earth science, which after graduating she taught for several years in Texas public schools, both elementary school science and high school geology and astronomy.

“Teacher retirement is fabulous in Texas,” she confided.

In the summer of 1970, Clodfelter had already signed a contract with Richardson Independent School District and gone to visit a friend in Washington, D.C., when she received a call from her mother saying that a “Dr. Teller at UD” was trying to get in touch with her. They’d had a spot open up in the Education Department, of which he was the chairman, and it was August, a bad time of year for a vacancy.

Clodfelter returned home and met first with Teller, then with then-President Donald Cowan, who, as Teller explained, liked to interview personally all candidates for tenured positions.

“What do you think of John Dewey?” Cowan asked her, referring to the creator of the modern education system.

Clodfelter couldn’t stand Dewey, and after a brief internal battle with herself, she decided she might as well be honest about this.

“I don’t think much of him,” she admitted.

So began Clodfelter’s career at UD.

“At UD, there was a different quality to the students,” she said. “I think it had a lot to do with their home influences.”

Still, though she appreciated the students, Clodfelter’s first years at UD weren’t easy. For one thing, she was not Catholic and had “never known a Catholic”; luckily, biology professor Sister Clodovia Lockett was always prepared to answer Clodfelter’s “Catholic questions.” Also, initially, the Education Department was part of the Psychology Department; when Education obtained its own office in the basement of Braniff Graduate Building, Clodfelter felt they were well-placed as what she viewed as the foundation of the university, but she had her work cut out for her making the rest of the university see the situation this way, too.

“This was my goal in the early years,” she explained. “I was battling how people thought about education, trying to get the university to realize that education was what we were all dealing with; that’s the foundation, where it all starts. Shifting the focus around this foundation would benefit everyone.”

These early struggles were tough, but according to Clodfelter, “It was a toughness you could work your way through.”

She eventually won her argument that education was a legitimate concern of all majors.

“We have changed the face of education,” she said. “The program deals with the human as a whole and those they’re responsible for.”

Among Clodfelter’s other accomplishments during her 40-year stint at UD was bringing a chapter of Kappa Delta Pi, the international honor society in the field of education, to the university.

Clodfelter was also the second recipient, in 1986, of what is considered the highest faculty honor at UD, the King Fellow Award. Criteria for the award include having taught at UD for a minimum of eight years and made a significant contribution to the university through excellence in teaching and scholarly work and as an exemplary colleague.

Clodfelter, who believed teaching and storytelling go hand in hand, often told the story of Mike, who lived in her neighborhood when he was a little boy. When Mike was in third or fourth grade, he got a puppy named Maude and brought Maude over to show Clodfelter, with whose schnauzers he always liked to play. Maude was a typical puppy — rambunctious, playful and not so great at listening.

Some time passed during which Clodfelter didn’t see Mike and Maude. Then, one day, Mike brought Maude back over, perfectly obedient and well-trained. Impressed, Clodfelter asked Mike how he’d taught her.

“I knew what I wanted my dog to know, and I tried to figure out how she would learn it best,” Mike told her. “I know my dog awful well.”

Always a student herself, Clodfelter thereafter incorporated this lesson when teaching future teachers.

“Know your dogs,” she would tell them.

Clodfelter officially retired from UD in 2007, continuing to teach occasionally until 2010. After that, she visited campus a couple of times a year; one of those times was for the Clodecott Awards given annually for the best children’s books written in the well-known Children and Young Adult Literature course.

“I miss the teaching,” she said. “It always fascinated me how someone would make a connection, and you could see it on their face.”

Through a bequest for tuition assistance, Clodfelter set up the Clodfelter Endowed Scholarship, an endowment for interdisciplinary studies (elementary education) students, during the last semester of student teaching. With her scholarship, Clodfelter hoped her wisdom, experience and stories would persist in influencing the teachers who emerge from the Education Department and, through them, the world and eternity.