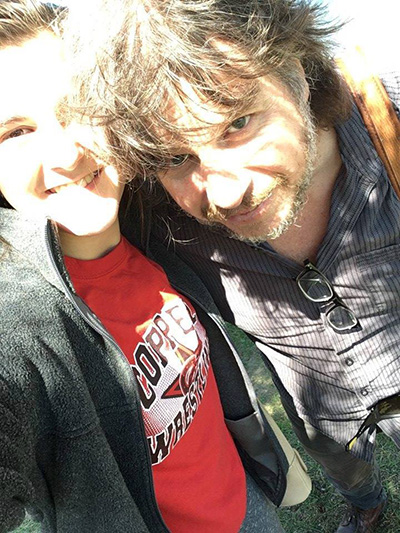 He once worked as a carpenter and enjoys cooking (particularly French cuisine), but Associate Professor of English Brett Bourbon’s greatest passions seem to be found in fatherhood and in storytelling in all of its forms.

A single parent to two daughters, Bourbon often enlists his girls’ help in the kitchen, but stories are the common language that connects them on the most profound level.

“My daughters and I made a home through our shared stories,” he said. “When one of my daughters was struggling with something, I would tell her a story. These stories form the moral and cognitive atmosphere we all breathe; they keep us alive and help us find ways forward.”

The son of a “computer guy,” Bourbon officially teaches literature but could just as easily talk about business, computer science, philosophy or physics; for the past two years, he has consulted on strategy and technology with the Silicon Valley design firm 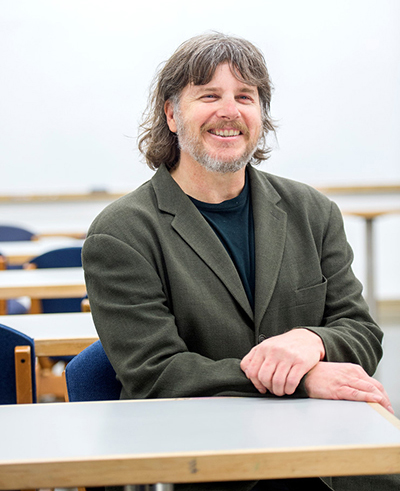 Slanted Light, whose clients include Nike, Tesla, Microsoft and Nerdwallet.

His connection with Slanted Light originated about eight years ago while teaching at Stanford, when he was interviewed by a consulting firm for Microsoft about artificial intelligence, consciousness and storytelling. Six years later, his interviewer had formed his own firm and was doing another project for Microsoft; he contacted Bourbon and requested that he come to San Francisco and talk for a few days. Thus Bourbon’s work with Slanted Light began.

“All of my work — philosophy, literature, teaching, economics — contributed to the projects we were doing,” said Bourbon. “So much of what I taught, even in my classes on Homer, had relevance and application to what I was doing in technology, strategy and business.”

Bourbon enjoys the puzzles involved in his consulting work, figuring out how to solve his clients’ problems in a practical context. He also appreciates the opportunity to apply philosophy “in real time in the topsy-turvy world of Silicon Valley.”

“Language matters, clarity of thought matters, culture matters,” he said. “Often people get stuck because they don’t have a way to describe something. I help find the words to capture what they almost know, to tell the story they need to tell.”

In fact, this spring semester at UD, Bourbon will teach a class on storytelling in business and in life. He appreciates UD’s openness to interdisciplinary classes such as this one and receptiveness to the multiple dimensions of life. The class will be a precursor to a Master of Leadership program to be offered by UD’s Braniff Graduate School of Liberal Arts beginning in fall 2017. Bourbon and Professor of Business J. Lee Whittington will co-direct the program.

“Our mission as a school and our aspirations as a people should be to do good and make life better for all of us,” Bourbon said of the Master of Leadership. “Leadership is about responsibility and example, not simply in display and as celebrity. Teaching is a form of leadership. We are called to lead in all sorts of ways in our everyday lives. How we do it needs to manifest our ethical commitments and our thoughtful understanding of life and people.”

Bourbon admitted that while pursuing his doctorate at Harvard, he wasn’t fully committed to being a professor; however, in his years teaching at Stanford before coming to UD, he realized that it was, after all, his vocation.

“Teaching is dynamic and interactive,” he said. “There is a focus on intellectual purity, even when teaching practical things — it comes from a commitment to the truth, to thinking well and deeply, to what you love and to what matters.”

As for storytelling, both as it pertains to this semester’s class and in general, Bourbon explained that sometimes it can be difficult to distinguish between the true stories we should turn to for guidance and the false ones meant to mislead.

“We reason out our lives by means of stories,” he said. “We make decisions — in intellectual life, in business, about people — through stories. But we need to find the true and rational stories, and that is hard.”