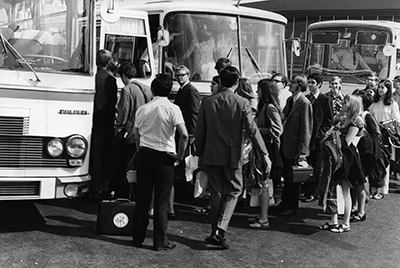 Jan (Weber) and Brian Farrington, both BA ’73, like to say that theirs was the last class that came to the University of Dallas as freshmen not knowing they were going to Rome. They were part of the second Rome class in the spring of 1971 and lived in the School Sisters of Notre Dame’s Generalate House.

The house was closer to Rome than today’s Eugene Constantin Campus; they could be in the city in about 15 minutes. Most of the students lived on the upper floors, but some of the girls were on the ground floor and could watch, from their windows, the kindergarteners who came to school at the Generalate House during the day.

“The nuns were very sweet to us,” said the Farringtons. “We don’t think they’d been around too many teenaged boys, though — they seemed appalled at the amount of food they ate!”

Dominican Father Thomas Cain was the director of the program during that spring 1971 semester; the Farringtons remember him as very accessible to the students, always ready to offer an orange and a (small) glass of brandy when someone came to him with a problem. When one student was trying to track down her grandmother’s baptismal certificate, the Farringtons and Father Cain were among those who accompanied her on the adventure, traversing curvy roads along the Mediterranean coast in a large Fiat. They were successful, finding the little town and the parish records and, of course, the baptismal certificate.

“The program operated sort of on a wing and a prayer in those days,” said the Farringtons. “But the flexible quality of it was one of the things we loved. We got a 21-day spring break because the Italians were threatening a general strike — as they do — and Father Cain didn’t want us to be stranded somewhere.”

After the Farringtons’ semester and one more in the Generalate House, the Rome Program outgrew that location and moved to the International Center for three semesters, then the Hotel LaVilla on the outskirts of the city, where it remained until 1989. (With fondness, “Romers” from the LaVilla years recall “the Villa” and “the ruins” a hill over.) Finally, in 1990, the Rome Program found its permanent home: the Eugene Constantin Campus, which opened for students in fall 1994. Affectionately known as “Due Santi” because of the legend that Saints Peter and Paul stopped to rest in the area on their way into Rome, it has been the home base of Romers for nearly 23 years now.

The Farringtons’ two UD alumnae daughters, Kate Farrington, BA ’02, and Jill (Farrington) Sweeney, BA ’06, were among these “Due Santi” Romers. In fact, Brian visited Kate during her Rome semester on the Eugene Constantin Campus in fall 2000.

However, as the Rome Program once outgrew the Generalate House, UD’s class sizes are getting larger, making it more difficult to accommodate all students who want to go to Rome. Rome is, however, integral to the UD experience.

“Rome did exactly what the Cowans wanted it to do; it grounded us right in the middle of Western civilization,” said the Farringtons. “It was the perfect place for a UD education, and it informed everything we learned and experienced at UD afterward.”

The Rome Expansion Campaign will help ensure that Rome will similarly inform the UD experiences of as many future students as possible.

In the photos: Top: The Generalate House. Body of story: Rome Program students in fall 1970. Both photos courtesy of UD Archives.