Teeing Off for UD 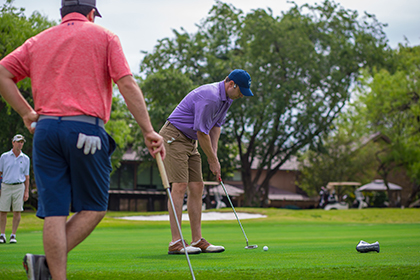 "The Galecke Open is always a wonderful opportunity for so many of us to get together and enjoy a beautiful day on the golf course, knowing that all of the funds raised will be used to help students attend the University of Dallas," said President Thomas W. Keefe.

With another successful tournament in the books and the winning team — Chris and Nick Flaherty and Luke and Kyle Callahan — awarded this year’s Galecke Cup, the Galecke Open remains one of North Texas’ most reputable charity golf tournaments. Proceeds earmarked for the Cor Fund support student scholarships and development, faculty research and development, and programs and services to enhance student well-being and success.

In 2015, the event was North Texas’ 14th largest charity golf tournament in terms of funds raised, according to the Dallas Business Journal.