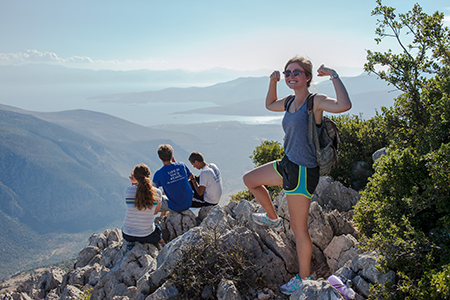 For the 12th consecutive year, the University of Dallas is listed as one of the country’s top study abroad schools, according to the 2016 Open Doors Report, an annual report on international education published by the Institute of International Education (IIE). UD ranked third (first in Texas) for the percentage of undergraduates participating during the 2014-15 academic year.

"The University of Dallas's abiding commitment to study abroad is rooted in the belief that students reap huge benefits from it,” said Dean of the Rome Campus and Professor of Classics Peter Hatlie. “Embracing the challenges and extraordinary learning opportunities of study abroad today will make our students better neighbors, citizens and leaders tomorrow.”

During 2014-15, Open Doors reported that more than 313,000 U.S. students received study abroad credit, an increase of nearly 3 percent over the previous year. UD grew at twice the national rate — 6 percent — from 240 students to 270 students.

Discover more about our acclaimed sophomore Rome Program at udallas.edu/romeprogram.