He Stayed for the Students 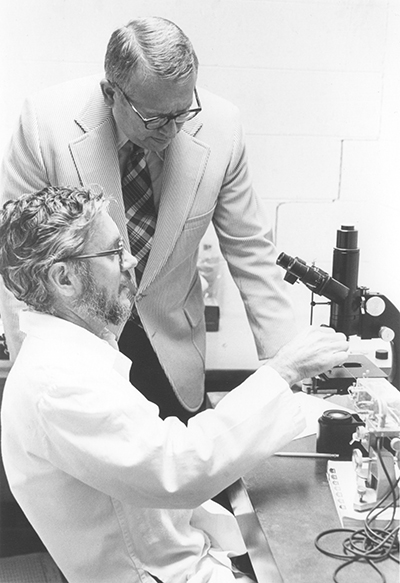 Associate Professor of Biology Frank Doe admits to missing Lynch Auditorium and the 8 a.m. General Biology I class he used to teach there.

“No one else misses that 8 a.m. class,” he said. “But I do. And Lynch Auditorium — World War III, heaven forbid, could be going on right outside, but inside Lynch we’d never know it — we’d just be carrying on.”

This summer, Doe will retire, just before his 80th birthday, after 47 years of teaching at UD. Sometimes people ask him why he’s stayed here for so long.

“You guys,” he’ll tell them, meaning the students and alumni. “I stayed because of you guys.”

He has often considered what characteristics he’s most enjoyed in UD students while teaching and associating with them; the list includes cooperation, empathy, fidelity, integrity, loyalty and responsibility.

“Now, I’ve only ever taught here,” he said. “So maybe this is true of students everywhere. But I do think that displaying these qualities in such prevalence is somewhat unique to UD.”

He believes that the greatest gifts UD gives students are a strong sense of responsibility and a work ethic.

“That’s so boring,” he admitted. “You can’t sell that to prospective students. But it’s the truth. I watch these students grow from freshmen to seniors, and some of them are hardly recognizable. And that’s a good thing.”

If you want to talk to Doe, you’ll probably have to get in line; as the health professions adviser, he has a steady stream of students awaiting his advice and guidance. The fall, especially, is a busy time, between teaching General Biology I and assisting seniors with medical school applications.

When students manage to secure those highly competitive med school interviews, Doe said he has four words for them: “Don’t mess it up.”

He and another biology faculty member, the late Bill Germann, became the health professions advisers more or less by default upon the death of longtime UD Biology Professor and Chairwoman Sister Clodovia Lockett, SSMN, in 1994.

“We just took over,” said Doe. “There were no meetings, no one asked us to — it’s just how it happened.”

He and Germann had been somewhat involved in the process prior to Sister Clo’s death, but she was the mainstay, Doe explained.

“After her death, pre-health advising became a big part of the job,” he said.

Doe came to UD in August of 1969, just out of graduate school; a post-doctoral fellowship wasn’t required in those days for tenure-track positions.

“I had a list of things I was looking for,” he said. “I wanted a small liberal arts school near a big city; a Catholic school was a plus. I had never heard of Irving, never heard of UD, but it fit the criteria.”

He wanted to be near a big city so that he would have opportunities for training in genetics; his research work prior to that had been mostly in cell biology. At the Southwest Center for Advanced Studies (SCAS), which is now the University of Texas at Dallas (UTD) but then was a non-degree-granting think-tank and research center for chemistry, mathematics, molecular biology and physics, he found the experience for which he was looking. Two or three days a week, he would finish teaching at UD and head up to Richardson to his second, unpaid job, where he would work until 8 p.m. or so.

Eventually, once he’d established relationships at SCAS, it became a paid gig; the connections he made there also helped open doors for some of his students, who went on to UTD to pursue graduate degrees in biology.

“It was a good choice,” said Doe of his decision to pursue research opportunities with SCAS — and to teach at UD.

Doe isn’t exactly sure how he’ll spend his retirement. He’ll probably play golf and spend some time with his grandkids, who are 10 and 7 years old. He won’t be doing any part-time work, however.

“I know one of my character defects is that I would take a part-time job and make it full time,” he said. “If I’m going to do that, I might as well stay here and work with you guys.”

He also plans to go with his wife to visit New England in the fall and see all of the trees in their autumn colors — which he hasn’t been able to do for the better part of the past five decades, since fall has always been his busiest time.

“There’ve been some tough moments,” he says of his decades teaching here. “But for the most part, it’s been very rewarding.”

Honor Dr. Doe with a gift.