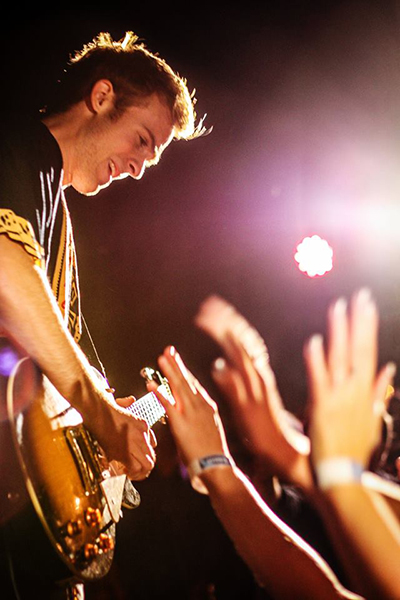 Two years ago, the University of Dallas lost a dear friend and alumnus, who was beloved by professors and peers alike. On Saturday, April 29, friends and family gathered outside the Haggar University Center, next to the Cap Bar, to celebrate the two-year anniversary of the passing of Andrew Esherick, BA '12, and dedicate his new memorial on campus. Esherick passed away on April 26, 2015.

“This memorial incorporates the things Andrew was passionate about and disposes them to others as a catalyst for conversation, discovery and reflection,” said Andrew’s widow Emma Esherick, BA ’15, who first met Andrew during her freshmen year at UD. “He would be doing those very things here if he were still with us today.”

It was during his senior year that Esherick met Emma, and before Emma’s junior year the couple would marry. Nine months later, the Eshericks had their first daughter, Charlotte, with whom Andrew was frequently seen walking around campus. April 2015, the Eshericks announced that Emma was pregnant again, and less than a week after Andrew’s passing, Emma found out that she would have another girl. In Esherick’s honor, the entire UD community rallied together to raise more than $100,000 for Esherick’s widow and daughters Charlotte and Gloria.

“Andrew was the ideal UD student. He loved learning, and it was here where Andrew found himself,” said Margaret Claahsen, BA ’15, sitting on the new stone bench installed in Esherick’s honor. “He saw beauty everywhere, and he made UD better by being here. His generosity of spirit was truly an inspiration."

According to those who knew him best, trying to describe Esherick is like trying to describe a poem or painting or one of his favorite songs. He was a devout Catholic who spent most of his time learning things he didn’t already know, despite his already encyclopedic knowledge of literature and poetry. Esherick loved reading, learning and playing his guitar, which he toted around campus regularly. During his time at UD, he also played in two bands, Buddha D’Souza and the Guys Upstairs, performing at campus events such as Battle of the Bands and Mallapalloza.

Last year, Claahsen approached Executive Vice President John Plotts and President Thomas W. Keefe about creating a campus memorial to honor Esherick. With the help and assistance of UD administrators and Esherick’s family, Claahsen and others managed to raise the nearly $5,000 needed to cover the cost of the memorial. Claahsen worked with Emma and with Nancy Esherick, Andrew’s mother, to create the memorial site, which includes a stone bench and an engraved memorial plaque, as well as a mesquite tree. They adorned the memorial with text from Andrew’s favorite prayer, Memorare, and the bench with a quote from one of his favorite songs:

And one day we will die

And our ashes will fly from the aeroplane over the sea

But for now we are young

Let us lay in the sun

And count every beautiful thing we can see

In the arms of all I'm keeping here with me

— "In The Aeroplane Over The Sea" by Neutral Milk Hotel