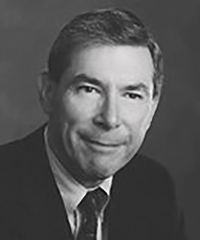 Former university trustee Robert “Bob” J. Finegan, passed away last week on July 7, 2017, at the age of 79, surrounded by his loved ones. He will be dearly missed and remembered as a courageous and kind spirit.

Finegan served as a member of the University of Dallas Board of Trustees from 1975-93. An avid investor, he possessed a breadth of knowledge over the university’s endowment and finances, serving as chairman of the finance committee and as a member of the executive committee during his nearly two decades of service.

Finegan was known in social circles for his indomitable spirit and impeccable character. He befriended everyone he knew, from fellow board members to generous university benefactors; including former board chairman Eugene Constantin, Jr., former Vice President of Academic Affairs Msgr. Edward R. Maher, and co-founders of Texas Instruments Patrick E. Haggerty and Erik J. Jonsson.

At the age of two, Finegan relocated to Dallas with his family from Cleveland, Ohio. He attended the Holy Trinity Catholic School, Christ the King Catholic School and Jesuit College Preparatory School in Dallas, as well as Loyola University in New Orleans. As a devout Catholic, he was inducted into the Order of the Knights of Malta, one of the most ancient and important Catholic military orders committed to the service of those less fortunate.

In 1960, Finegan earned his bachelor of business administration from the University of Texas at Austin, afterwhich, he enlisted in the military, serving as commander of a military police battalion for three years. After concluding his military service, Finegan joined Price Waterhouse as an accountant, later finding his passion for investments.

This Sunday, July 16, the Church of Incarnation will remember and honor Finegan at the Mass of the Holy Spirit at 9 a.m.