Iraqi Couple Will Use UD Education to Enrich, Preserve Culture 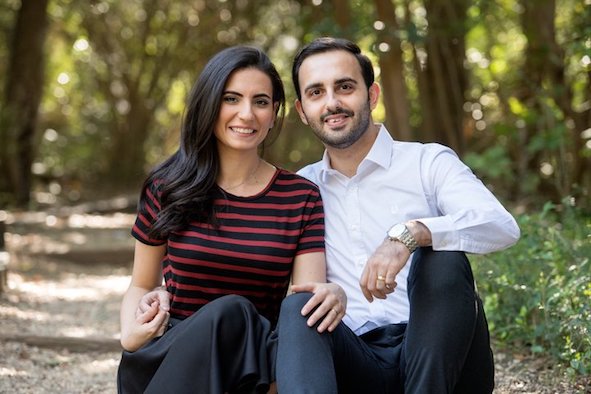 They came here so that someday, they can go back with even more to offer. Sana Kandalan, MA ’19, and Anmar Oghanna, MBA ’19, are a wife and husband hailing from Ankawa, Erbil, in Iraq. They both received scholarships to pursue graduate education at the University of Dallas; Kandalan is working toward her Master of Leadership through the Braniff Graduate School of Liberal Arts and Oghanna toward his Master of Business Administration, with a finance concentration, through the Satish & Yasmin Gupta College of Business.

“We have a big responsibility,” said the couple. With their graduate degrees, they intend to return to Erbil to help strengthen and enrich their community there, specifically Ankawa’s Christian community, because Christians in Iraq have struggled for many years, especially since the ISIS invasion in 2014, and many have left in search of better life conditions elsewhere.

“We want to be part of the church’s mission,” said Oghanna. “The church is planting hope, giving Christians reasons to stay in Iraq.”

However, this isn’t all: Kandalan and Oghanna — like many of their counterparts who have gone to other places, such as Europe and Australia, to receive educations — are also trying to spread the message to the rest of the world that there are still Christians in Iraq. These Christians are the original people of this country, but now, as a persecuted minority group, they are in huge need of support from other people and countries — especially the United States, as it has an influence in Iraq.

“They — we — are still there, serving our community, fighting for our rights in our own land,” they said.

Kandalan is an educator. She received her bachelor’s degree in biology from Salahaddin Sciences College and worked for four years in a Catholic school. Then, she went on to get her online master’s degree in educational leadership from the University of Roehampton in London while working at the Catholic University in Erbil (CUE). Kandalan was asked by the Archbishop of Erbil Bashar Warda to teach those who had been displaced by ISIS; she also served as the assistant to the director of the program for these students at CUE. Now, in her graduate studies at UD, she hopes to enrich her knowledge and experience in order to someday help and work even more effectively at CUE, providing students with a quality education.

“Faith and education give hope, especially to the students who were deprived of learning after being forced to flee their homes,” said Kandalan. “Except faith, everything was taken from them, and this is heartbreaking. This can also be triggering in the sense of making some of us rethink the meaning of our lives, question our humanity, and find out how to be more helpful to others.”

Oghanna, meanwhile, was at the top of his class at the University of Kurdistan Hewlêr in Iraq, studying business and management. After graduating, he went to work for a company in Erbil and volunteered part-time at a Catholic NGO. In the evenings, along with Kandalan, he was part of a church group, helping with church-based events for internally displaced persons (IDPs) as well as Syrian refugees. Additionally, he was a member in the Apostolic Work Team established by Archbishop Warda; the team’s goals are to educate and attract youth to the church, to serve at the church, to help themselves and others grow in faith, and to use their energy positively. Through this group, Oghanna and Kandalan volunteered to organize events and help those in need.

For this couple, education is paramount, the thing they are seeking to promote and which they believe will effect the change they are striving for in their community.

“My students told me that learning helped them to be happier people,” said Kandalan. “They could feel the change and see how education changed them for the better. Still, though, they need more support in other areas.”

“Education in Iraq was once very advanced,” explained Oghanna. “But since the 1970s, the governments have not been focused on education. The system went downhill, especially in the last 10 or 15 years. Private universities were established, but couldn’t get back up to the same international standards as before. This is where the idea of the Catholic university came in, to provide students with right and interesting education that can meet the needs of all kinds of students. To do so, a well-trained and skilled staff is needed.”

The couple cites the type of education they are receiving at UD as the model for what they hope to promote back home.

“We do not just learn about the subjects,” said Kandalan. “We learn other crucial things —cultures, adaptation to change, and accepting the different other as a human being. In a team I’m working with for one of my classes, there are four people from four different countries, which I find really interesting. This itself is an experience. It promotes diversity and adds more value to the education of a student as a whole. This is what CUE will also strive to do in the future, as Iraq is a diverse country. We would like to be open to differences, to every student; in turn, students will be taught to be open and cooperative, to be advocates who will transfer their learning to the next generations. Also, I find being at UD a wonderful opportunity, as it is providing me with knowledge and needed skills. More importantly, as students, we are given the chance to implement our learning in real activities and projects.”

They explained how Archbishop Warda is sending students to countries around the world to receive these types of well-rounded educations and to learn about other cultures so that they can take all of this knowledge and experience back to their community, thereby enriching their own culture.

“We would also like to show the world that we have quality minds,” said Oghanna. “We highly appreciate opportunities like the one we have now at UD. There are many other qualified but disadvantaged youth who are seeking such opportunities to further develop their skills and knowledge and be of help to our people and community in Iraq.”

The University of Dallas is praying for the victims of the Nov. 12 earthquakes in Erbil.