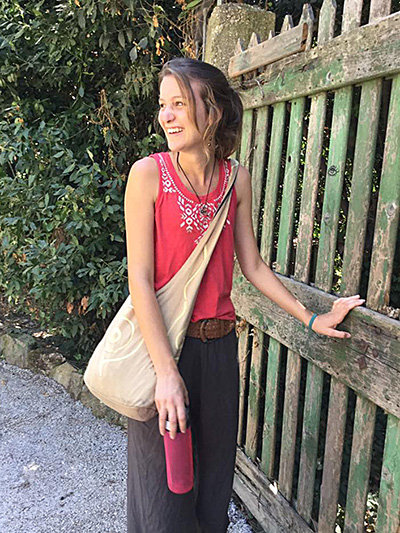 On a free afternoon, my friend Bea and I had walked the few kilometers that separated our campus at Due Santi from the small village of Castel Gandolfo, perched above the Lago Albano — a glassy volcanic lake cradled by wooded shores. We had visited this village our first week with our Rome class, and I could vaguely remember feeling unimpressed when I wandered into a small church off the square. This afternoon, though, I saw the church of San Tommaso with new eyes.

We had just left our Art and Architecture class, and the names of Baroque popes and architects were still swirling through our minds. “Look,” Bea said, “that church is Baroque.”

“Yes.” I stopped her before we could get inside. “Who do you think made it? Borromini?”

We decided that it couldn’t have been Borromini since the façade didn’t have his characteristic curves. It must have been Bernini because the name of Pope Alexander VII, one of his patrons, was written above the entry.

I was shocked by the beauty I saw when I stepped inside the door, and I wondered how I could have missed this before. The church wasn’t large, but it didn’t need to be because a dome soared upwards above our heads, giving an impression of grandeur. Bea pointed out that the dome was topped by a “lantern,” one of our key terms; as we looked around at the marble and gold, naming the different architectural decorations, we realized how much skill it had taken to craft every detail.

The sculpted angels supporting the dark canvas of Christ’s crucifixion above the altar were frozen in grief-stricken motion, eyes averted, while the Father looked down from a cloud up above. It gave us the feeling that we were earthly spectators watching a heavenly drama unfold before our eyes that very moment. We had learned in class that Bernini used his art to express his own personal devotion and in that moment, we felt the emotion that Bernini had painstakingly carved into the stucco, leaving a message for us to read hundreds of years later.

If Bernini’s art did not move me only a couple of months before, it was because I’d had no language with which to appreciate it. It was in naming the smallest details that I saw them for the first time, and in knowing their architect that I caught their meaning, in that curious marriage of past and present that gives Rome its poetic beauty. Can Bernini be dead when his expression of worship still shapes our hearts today?

It is this experience that Dr. Robinson tried to describe to us our first day of art class. She had probably realized that we wouldn’t remember the hundreds of names and terms we crammed the night before a test, so her goal was different and, perhaps, more challenging. She wanted us to learn to see.

Learning to see more deeply the beauty around me is one of the greatest gifts I took away from the Rome semester. Every day was a new discovery. We could scale the Italian Alps to find ourselves on top of the world, looking down on a white wilderness of majestic, snow-capped peaks; or sit in silence in the dark, rainbow recesses of the French cathedral at Reims, watching light sift in through the stained-glass windows high above. Even a typical school day could become an adventure if we woke up in the dark to take the Metro into the city before class and climb St. Peter’s dome, where we could see the first sunrays shoot across the crowded roofs of Rome.

When we came home, the roses would be in bloom in the vineyard; if it were evening, the sun would be setting in startling colors that lit up the sky behind our dorm building and called us out to perch on our window seats and watch until the color faded. I tried to take photos, but soon realized that a picture cannot capture the beauty of the things we were experiencing. So I learned to put down my camera and simply take in all the beauty.

It wasn’t just that I was overwhelmed by the sheer magnitude of so many beautiful things but that I was learning to ponder and internalize them so that they could become a part of me, like that afternoon in Castel Gandolfo when I understood Bernini’s art as his expression of worship and truly saw it for the first time.

There were other times, too. There was the morning we scaled Mount Parnassus to watch the sun rise over the valley and I felt the same sense of awe that led the ancient Greeks to build their temples in the valley below; or there was the evening when, slipping under a barbed wire fence to reach the top of the ridge above St. Francis’ village, I hugged the horses grazing on the wild grass and felt the glory of the sunset St. Francis would have known so well. I’d seen plenty of sunrises and sunsets before, but what set these apart was the meaning of the lives woven into these places. In seeing Mount Parnassus through the eyes of the Greeks and Assisi through those of St. Francis, I found a beauty richer than anything I could have discovered on my own.

It is like the insight Dr. Mirus, our philosophy teacher, found buried in the simple stones of a ruined Greek theater. We were all sitting heedlessly among the wild grasses pushing their way through the paving stones, but as he spoke these stones became the ordered frameworks of our own lives, and the wild grasses became our experiences which break apart the person that we once were only to mold us into someone new. Maybe this is what Blake means when he invites us “to see a World in a Grain of Sand / and a Heaven in a Wild Flower” — this experience of beauty which teaches us to ponder the beautiful and to be transformed by it.

And maybe that’s why, coming home after a semester abroad, our homes haven’t paled in comparison. I love the way T.S. Eliot puts it:

We shall not cease from exploration

And the end of all our exploring

Will be to arrive where we started

And know the place for the first time.

After we got home one of my classmates posted that, after last semester, she now has fresh eyes with which to see the beauty in her home state. I’ve experienced the same; Irving’s bushy-tailed squirrels have a joy all their own, and nowhere except in Texas can you find the snow-tipped wild bluebonnets flowering along the side of every highway. They stop me under a tree to share their fascination in a rounded nut or invite me to carry away a bouquet as an expression of the childish joy of spring. This is Dr. Robinson’s dream come true: we’re learning to look for beauty and, once we find it, to stop and really see it until we can catch a glimpse of what it means.