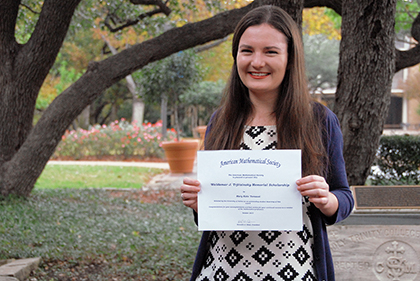 As one of seven undergraduates to receive this year’s award given by the American Mathematical Society (AMS), Tomassi will delve further into the field of mathematics in her studies at UD, as well as explore her interest in computer science. UD was one of seven schools in the country selected by the AMS to bestow the award on one worthy student who plans on pursuing a career in mathematics.

“There are plenty of deserving math students at UD,” said Tomassi. “I’m honored to receive such an award, and I’m especially grateful for the support of my professors in the Mathematics Department.”

Although still undecided where her career in mathematics will take her after UD, Tomassi would like to make a positive impact in society by working on issues such as homelessness or human trafficking. “Mathematics allows you to explore and work in so many different disciplines,” she said.

“I truly enjoy studying mathematics, because it gives you an opportunity to further explore philosophical thought in a more tangible sense,” she said. “Learning about the process of mathematics has helped me form better methods of decision making and critical thinking, which benefit not only my studies at UD but my day-to-day life.”

According to her award biography, “Mary Kate is one of those rare students who not only excels in mathematics, but also embraces the mathematics culture at the university by working in the Mathematics Department office.”

Additionally, Texas Right to Life named Tomassi one of 38 2017 Dr. Joseph Graham College Fellows in April. Over the summer, she participated in a week-long training program as part of this fellowship to gain pro-life knowledge and leadership skills to bring back to UD.

This year celebrates the 25th anniversary of the establishment of the Waldemar J. Trjitzinsky Memorial Awards, which was made possible by a bequest from the estate of Waldemar J., Barbara G. and Juliette Trjitzinsky. These funds help support mathematics students who lack financial resources. Each year the society selects a number of geographically distributed schools who in turn make one-time awards to assist students in pursuit of mathematics careers.