Meet the Class of 2021: Eagle Scout Looks to Politics, Advocacy 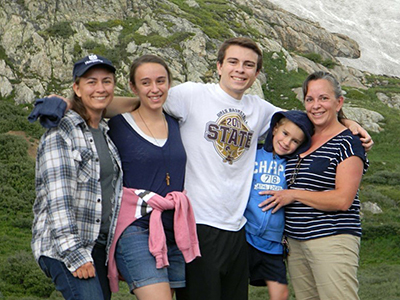 Colin Lancaster, BA ’21, didn’t initially consider UD because so many family members — including his parents, Michelle (Seitz) and Michael Lancaster, both BA ’92, many of his mother’s 10 siblings (including Bishop of El Paso Mark Seitz, BA ’76 MDiv ’82), and many of his cousins — had gone to school here, and he didn’t want to be just another “legacy” student. So instead he looked at schools such as Franciscan University, Benedictine College, the Catholic University of America, and the University of Wisconsin-La Crosse, among others; however, when he realized that he wanted to major in politics, UD was suddenly a contender.

“UD’s reputation for forming thinking processes rather than telling you what to think was one of the greatest draws for me in my decision,” said Lancaster.

From Boy Scouts to a senatorial internship, Lancaster has always been deeply immersed in his Wisconsin community. After starting out as a Cub Scout in second grade and gradually moving up through the ranks, he became an Eagle Scout in October 2016; as his Eagle Project, he chose to replace the rotting wooden garden wall at his church, Immaculate Conception Catholic Parish, with a brick retaining wall, as well as redo the gardens.

“The community came together to support the project,” said Lancaster, who cites scouting as one of the most positive experiences of his life and his scoutmaster as one of his most influential role models; this man provided his troop with hands-on life skills and community engagement by letting them run his store, Momma Bees’ Kettle Korn, through which they were also able to raise money for travel to places from Gettysburg and Washington, D.C., to the Badlands and Pensacola.

In the summer of 2016, Lancaster was chosen as the representative for Edgewood High School of the Sacred Heart at Badger Boys State (BBS), a week-long civics and government course.

“My time there was very pivotal because it made me realize my passion for politics and ability to work in advocacy organizations,” said Lancaster. “I met a lot of amazing people at BBS.”

One of these people was a staffer for Senator Terry Moulton of Wisconsin’s 23rd state Senate district and provided Lancaster with an introduction to the office, where Lancaster requested, and received, a chance to be an intern. He then spent the 2016-2017 school year interning with Sen. Moulton’s office after school.

“It was an extremely rewarding experience,” said Lancaster. “I learned the ins and outs of a legislative office and the reality of the legislative side of politics that you don’t learn from watching the news.”

Lancaster was able to interact with the Senator’s constituents and respond to their concerns, prepare Senate briefings, revise and release press releases and columns, work with legislative records and databases, and be on the frontlines of promoting legislation such as Wisconsin’s ban on the sale of fetal tissues and protection for sportsmen and natural resources, among others. Ultimately, the experience showed Lancaster a potential path for both college and beyond.

Currently, Lancaster sees three possible roads for his life post-graduation: first, to work in the communications department of an advocacy organization such as National Right to Life or Catholic Charities.

“Getting people involved in the political process to change unjust laws is something I know I’d love,” said Lancaster.

Second, he might do a pre-law concentration at UD in addition to a politics major with an aim toward law school, so that he could then work in the same types of organizations, but on the legal side. Finally, he might want to be more directly involved in the political process by working in legislative offices or being a public servant in some capacity.

From playing second trumpet in the jazz ensemble and planning and presenting for the current events and debate club to participating in the ski club and the Edgewood Catholic Crusaders (a group that helped serious Catholic students enrich their faith together through prayer and guest speakers), Lancaster stayed busy in high school. At UD, he hopes to become involved in the Alexander Hamilton Society as a way of continuing his interest in debate and current events, as well as find a local Knights of Columbus or another fraternal organization to join, in addition to a Bible study/catechesis group. Music has always been one of his passions, so he would love to keep playing his trumpet as time allows.

Further, he is a self-proclaimed nerd and loves, among others, the Marvel cinematic universe, Star Wars, Star Trek, Harry Potter and Lord of the Rings.

“I will say that I am one of the biggest Marvel nerds out there and I will nerd out whenever the subject is brought up,” he said.

Additionally, he considers himself “a bit of a film geek”; he enjoys seeing new movies and learning about the filmmaking process and the artistic talent (or lack thereof) that goes into cinema. Recent favorites have included La La Land, Spiderman Homecoming and Hacksaw Ridge. An avid reader, he has recently developed a particular interest — which should be well-nurtured here at UD — in books on theology. In keeping with this new interest, currently in progress or on his reading list are Brant Pietre’s Jewish Roots of the Eucharist, Thomas Merton’s  No Man is an Island, Bishop Robert Barron’s Catholicism and G.K. Chesterton’s Orthodoxy.

“An essential factor for me was the vibrant and strong intellectual Catholic identity at UD,” said Lancaster. “My faith is important to me, and I wanted to be around others who would be able to help me strengthen and increase my knowledge of it. When I visited in the fall of 2016 and saw UD for myself, I knew it was the place for me. From the way the students interacted with each other to the environment in the classes I sat in on to the student participation in daily Mass and adoration, I felt strongly that UD was the best place to sharpen my mind, grow my faith, and hopefully meet other people who feel the same.”

“Also, hopefully I’ll meet some fellow nerds who I can talk to about everything from Harry Potter to Marvel to Lord of the Rings,” he added.

In the photo: Lancaster with his mother and siblings at St. Mary’s Glacier.