Meet the Class of 2021: Future Orthodontist Will Nurture Smiles 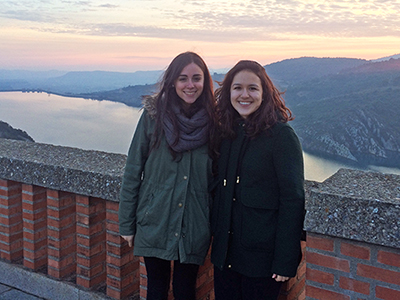 After high school, Maria Zambrana, BA '21, wanted to explore her roots — an exploration that took her to Spain, where her great-grandparents hailed from, and to the Universidad de Navarra, where, like her sister before her, she studied in the international foundation program with students from all over the world, including others from the U.S. and many from Asian countries. The students learned about Spanish culture, including the history and language, and how to immerse themselves in it.

While in Spain, Zambrana traveled some and also took part in the Opus Dei community there, but she admitted that most of her time was devoted to studying. Still, she is entering UD as a freshman, though some of her Spanish and psychology credits from her year in Spain will transfer. She is looking forward to getting back to school again (she took a year off after Spain), having classes and a schedule, and simply learning in general.

After working as a dental assistant in the year after Spain, Zambrana is firm in her dream to become an orthodontist. She plans to major in biology, doing the pre-med track. When asked what she loves about the field, she laughed: “What don’t I love about it?” She explained that she enjoys all the “nitty-gritty” details of straightening people’s teeth, but it goes deeper than that.

“As a Catholic and a woman, I want the ability to nurture someone,” she said. “Someone’s smile can change their outlook on life; it raises a person’s confidence and brings them closer to the dignity Christ sees in them.”

Zambrana warned that the story of how she learned about UD sounds made-up, but she promised it’s true: her mother is good friends with Father Paul Scalia, son of the late Supreme Court Justice Antonin Scalia. When asked what schools he would recommend, UD was on his list. Additionally, though, Zambrana grilled parents of former high school classmates, many of whose children came here, about their children’s experiences, including favorite professors. Based on their input, Affiliate Assistant Professor of Theology Sister Jane Dominic Laurel is among those with whom Zambrana looks forward to studying.

Dance falls among Zambrana’s many talents and loves; she spent approximately 30 hours per week doing traditional ballet all through high school, in addition to participating, starting her junior year, in a program called Leaping Leaders, in which she and a friend taught free ballet classes to 6-to-10-year-old girls in an impoverished area of town. During the school year, they taught every Saturday morning; during the summer, they would have an intensive course of full days every day for one week. Zambrana resumed teaching in Leaping Leaders this past year after returning from Spain, biweekly this time, as she was the only instructor.

“Dance helped me establish my femininity,” said Zambrana. “And teaching it gave me so much joy.”

Another source of joy was musical theater, in which she participated through both her parish and her school, singing and taking voice lessons.

“I loved singing,” she said. “I would like to perform in musicals at UD — something to get me singing again.”

She also found joy in youth ministry, working with middle school girls at her church, and hopes to identify ways of continuing that type of work while at UD.

Overall, Zambrana looks forward to discovering the new sources of joy that await her in college — and to meeting the lifelong friends she expects to find here.

In the photos: Top: Valley of the Fallen near Madrid, which Zambrana visited during her time in Spain. Story body: Zambrana and her friend Maite with the view from the Shrine of Torreciudad behind them.