Meet the Class of 2021: Seasoned Traveler, Volunteer Will Teach 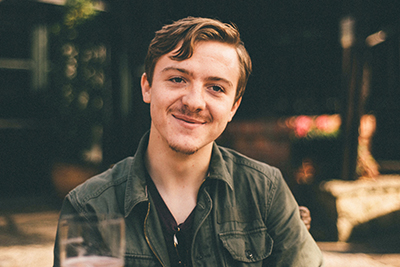 None of his four older siblings went to college, and Daniel Bishop, BA ’21, has been working in the ticket office at the Perot Museum for the past couple of years since graduating from high school, nurturing a vague interest in architecture and doing his best to educate himself. Finally reaching the conclusion that anything he really wanted to do with his life would require more formal schooling, he began looking at his options; immediately, UD’s website caught his eye.

“It’s a really good site,” he said. Upon delving into the pages, he discovered what he needed to know: that the University of Dallas is the best school in the Dallas/Fort Worth area at which to learn the classics.

An Orthodox Christian who is studying Byzantine chant and enjoys reading poetry and metaphysical works, Bishop should fit in well at UD; he plans to major in English but is also interested in theology. Another pastime commonly favored at UD, world travel, also ranks high on his list: the highlight of his life so far was a two-week pilgrimage he took with his godfather to the Isle of Iona, the base of the Irish Christian missionary St. Columba, in Scotland. The Scottish people, as much as the isle itself, sparked his interest and imagination.

“They were very friendly, always willing to strike up a conversation with strangers in the street,” Bishop said.

Additionally, this Denton, Texas, native recently spent two weeks in Poland, specifically at Auschwitz and in Krakow’s Jewish Quarter, carrying equipment for his friend’s documentary film crew. These experiences make him appreciate that UD is a school with a concern for not only the here and now, but also other times and places — and how the far-back and far-away connect to what we’re encountering in our world today.

Bishop’s past has also included seven years of the Civil Air Patrol, the auxiliary cadet program of the Air Force, which performs search and rescue as well as aerospace education. Bishop was a squadron cadet commander, which meant he ran the squadron and trained cadets in both moral leadership and drills, as well as participating in orientation flights.

"I wasn't prepared for the responsibilities of command when I received this position, but having to teach things forced me to learn the subject matter well. I learned that the ability to teach is the sign of true knowledge,” said Bishop.

A different but equally enriching opportunity to positively affect the lives of others came when Bishop’s sister developed an interest in horses. Her involvement at a local stable led to Bishop helping with equine therapy there, assisting physically or mentally disabled children and young adults during their horseback therapy sessions.

“I really miss the riders and the horses, and I plan to go back to volunteering at the stable during school breaks,” he said.

With such a wealth of experiences under his belt, Bishop sees a future in teaching, especially high school English or theology. And now that he’s here at UD, he looks forward to doing the thing he’s been doing on his own for the past couple of years, but now with more structure: dedicating himself simply to learning.