Meet the Class of 2021: Twins Both Will Pursue Medical Careers 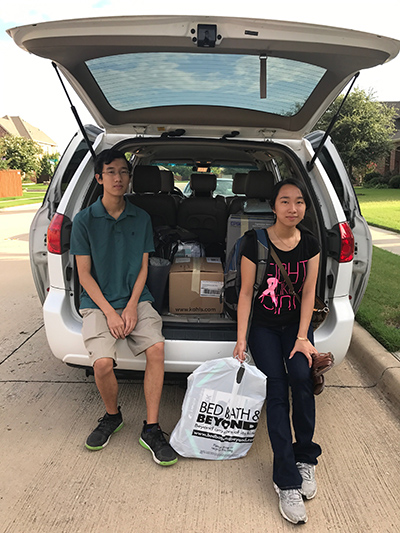 She and her twin, Lam Dang, BA ’21, both started their college journeys as UD freshmen this fall. Their aunt and uncle are UD alumni, so the twins initially learned about the university through this family connection, but they still followed their own paths to get here. Vi always believed she would go to the University of Texas at Dallas (UTD), like her cousin did, but ultimately fell in love with UD’s small campus and population — a significant change from her large high school in Allen, Texas. Lam, too, was drawn to UD and visited campus several times to explore what was offered here. (His aunt and uncle’s influence didn’t hurt, either.)

Both twins were part of the Future Health Professionals (HOSA) in high school and are planning to be pre-med and major in biology here at UD. Vi participated in a clinical rotation program and a pharmacy program in high school; everything in the medical field interests her, but she thinks emergency medicine might be her favorite.

“Something about the fast pace and adrenaline-filled action captures my attention,” she said.

She also loves animals, though; she was on the veterinary pathway prior to doing the clinical rotation program and still has an interest in small animal medicine.

It’s not strictly science, though. Both twins helped out in their high school’s art department. At UD, Vi hopes to pursue her love of sculpture through an art concentration, in addition to nurturing her faith through the Catholic community and participating in activities more specific to biology majors; Lam, too, might still look for art-related extracurriculars as well as those pertaining to pre-health and biology. Both twins enjoy reading and playing the piano; Lam, however, wants to mainly focus on his coursework. Most of Vi’s hobbies are related to the fine arts and literature; she also sometimes crochets and has made clothes and blankets for pregnancy centers with her church’s knitting group.

At UD, the two are looking forward to making new friends.

“In such a big high school, it was very hard to make lasting friends,” said Vi. “I hope that on a smaller campus, I’ll be able to get to really know more people and stay friends with them.”

However, they know they can always count on each other for support.

"It’s nice to have someone around who goes through the same things,” said Lam.

“I always know I have Lam's support whenever I have an idea, and it's nice to have someone close who isn't afraid of calling me out when I’m being stupid,” said Vi. “Of course it works both ways. When we were younger we would fight a lot about random subjects, but as we got older, the fights started turning into debates that let us develop who we are.”

All their lives, Vi and Lam have shared so many things, from shots at the doctor to friends and activities. They’re excited to be starting this new phase of their lives together, too.

“Honestly, I couldn't imagine not having him as my twin, because he’s my other half,” said Vi.