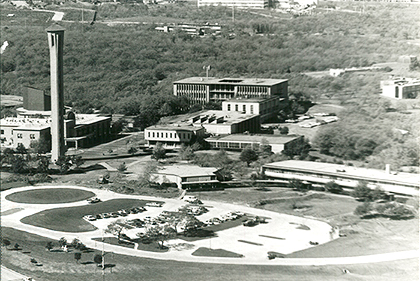 As the university celebrates another milestone of 50 years of graduate education, we are reminded of those who helped found our institution and their stories that helped cast the molding. Professor Emeritus Lyle Novinski, former chair of the Art Department; and Sybil Novinski, university historian and archivist, both recall UD’s physical campus when “there was nothing else around and everything was flat”; Father Roch Kereszty, adjunct professor of theology, remembers serving as UD’s first campus chaplain; and Scott Dupree, professor of English, recalls the arrival of both Donald and Louise Cowan in 1959.

As time goes on, though, history can be forgotten, so we gathered this list of not-too-common UD stories to both remember and cherish:

1) Dallas/Fort Worth’s Catholic community blossomed with the opening of UD in 1956.

The Sisters and St. Mary of Namur became reunited with their original founders, the Cistercian monks, when the two religious communities founded the new Catholic university in Irving, Texas, at the invitation of Bishop Thomas K. Gorman of the Diocese of Dallas.

“There were no Catholics to speak of until everyone began to move to this part of the country,” said Sybil Novinski, who’s affectionately referred to as “the guardian of the flame at UD” for her deep knowledge of our institution's founding and its students, faculty and continuing legacy in higher education.

2) In 1964, the Blakley-Braniff Foundation provided the university’s largest-ever endowment (in today’s dollars) of $7.5 million, establishing the Braniff Graduate School of Liberal Arts.

“I didn’t know at that time that I had sealed my entire career on the first day of class,” said Dupree.

“Now, you must go off and finish your Ph.D., then come back to UD and teach,” Louise Cowan once told Dupree, knowing that he would one day return to his beloved alma mater. Dupree became UD’s first Fulbright Scholar and Woodrow Wilson Fellow for Graduate Studies, and after earning both his master’s and a doctorate from Yale University, he returned to UD in spring 1966, where he has remained ever since.

“That was my initiation into freshman student life,” said Roch, recalling the time a student knocked on his residence hall door around 2 a.m. requesting confession.

One of several Cistercian monks from the Monastery of Zirc who fled communist Hungary, Roch is the longest-serving full-time faculty member who is still teaching at UD. Roch was asked to take on the role of the campus’ new (and first) chaplain within his first few weeks of arriving in fall 1963.

5) UD had the first integrated coed Catholic Art Department in the country.

“We were aware that we were on absolute pioneer ground,” said Lyle Novinski, one of the Art Department’s founding faculty who joined in the fall of 1960.

Cistercian monks and nuns from the Sisters of Saint Mary helped form much of the Art Department’s founding faculty, as the university and department charted new water in Catholic higher education. Even today, according to Novinski, UD is one of only three such Catholic universities to offer terminal degrees in art.

6) When UD first opened, all Catholic students were required to take two credit hours of Theology every semester.

To avoid additional coursework some students concealed their Catholic identity on their UD admissions applications, according to Sybil Novinski, who served as registrar, associate dean of students and associate provost, before becoming the university historian and archivist.

In 1977, Theology was replaced with Scripture and Western Civilization, which then became a requirement for all undergraduates and would later help form UD’s nationally-recognized Core Curriculum.