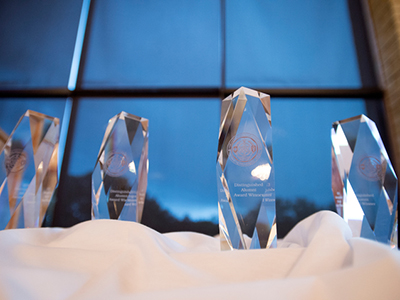 The University of Dallas National Alumni Board has announced its annual list of distinguished alumni — the highest honor the university can bestow upon its alumni. The 2017 honorees include university trustee Chris Bright, BA ’78; former university trustee Joanne H. Stroud, MA ’72 PhD ’75 MA ’80; Ray Khirallah, BA ’72 MBA ’76; and Barbara, MPM ’03, and Steve T. Landregan, MA ’73. The Distinguished Alumni Award recognizes alumni who have demonstrated sustained and distinguished accomplishments and contributions to any field of human endeavor.

Award recipients will be honored during a reception and dinner Saturday, April 22, 2017, at the Omni Dallas Hotel.

A recognized leader in real estate and a current university trustee, Bright is CEO of the Dallas-based commercial firm Bright Realty. He has directed the firm’s real estate activities through hundreds of projects in which it has been a development, equity or lending partner. Bright’s civic engagement includes serving on the board of directors for A Weekend to Wipe Out Cancer, Big Brothers Big Sisters of North Texas and the McKinney Avenue Trolley Association.

Stroud has exemplified a life of leadership in arts and letters, philanthropy and civic life. She was among the first to receive a doctorate from the University of Dallas Institute of Philosophic Studies. She taught as an adjunct professor at the university for 12 years before co-founding the Dallas Institute of Humanities and Culture, where she teaches and has served as director of publications for more than three decades. Stroud has authored nine books and regularly champions civic engagement, having served on a number of boards including those of the university, the Dallas Museum of Fine Arts, Sarah Lawrence College, the Southwestern Medical Foundation and currently the Dallas Institute of Humanities and Culture, as well as having served as a Harvard University board overseer.

For 35 years, Khirallah has led a distinguished career in law. As a partner in the Dallas law office Thompson Knight, LLP, he has built a large real estate practice, receiving numerous awards for his work. He was named one of “The Best Lawyers in America” (2007-17) by Woodward/White, one of the Texas Super Lawyers (2012-16) by Thompson Reuters and one of the Best Lawyers in Dallas (2007-09) by D Magazine. Khirallah is also a member of the American Bar Association (Real Estate Section), State Bar of Texas (Real Estate Section), Dallas Bar Association, International Council of Shopping Centers and The Real Estate Council, as well as a fellow of the Dallas Bar Foundation.

Barbara and Steve T. Landregan are recognized for their commitment to the founding and development of the Ann & Joe O. Neuhoff School of Ministry, their support of the Landregan Lecture series for the past 18 years and their more than 85 combined years of service to the Catholic Diocese of Dallas. Both have served as adjunct faculty for the Neuhoff School of Ministry and its Catholic biblical school. Barbara served four years on the university's National Alumni Board.

Barbara was the founding director of the Catholic Conference and Formation Center and guided its growth for 14 years until called upon by Bishop (now Cardinal) Kevin J. Farrell to oversee and expand the program to implement the United States Conference of Catholic Bishops Charter for the Protection of Children and Young People as director of safe environment. Steve recently retired as historian and archivist for the diocese after 50 years of service, having served as editor of Texas Catholic, co-founder of the Permanent Diaconate and director of pastoral planning. He served as a member and chairman of the U.S. Bishops Advisory Council 1974-76 and on the boards of the Texas Catholic Conference and the Texas Conference of Churches. In 1997, he was awarded the papal medal Pro Ecclesia et Pontifice (“For the Church and the Pope”) for a lifetime of service to the church.