To Teach Them the Faith 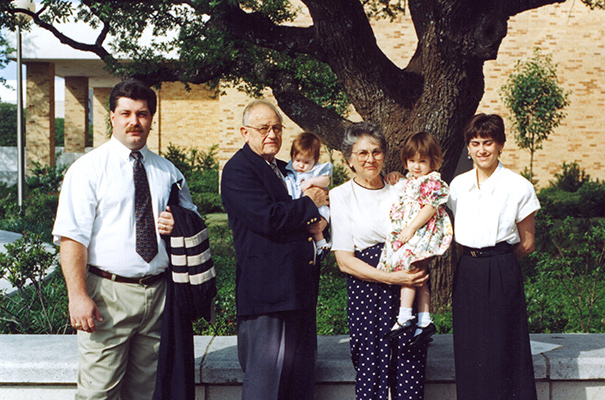 Alice Nicholson, MA ’95, began checking books out of UD’s library right around the time the university opened in 1956 — which coincided with her family’s relocation to the Dallas area. In the late ’60s, she began taking classes.

“I just took a course here and there that interested me,” she said. “It was after Vatican II, and I wanted to find out for myself where the dissent within the church was coming from.”

Nicholson had attended Catholic schools from grade school through college, so she knew she was on solid ground faith-wise, but she wanted to be able to better explain and defend her faith to others.

“The classes I took at UD gave me more self-assurance,” she said. “While I’d had a very sound religious education growing up, I became a more enlightened Catholic. I also learned where to find information when I needed it, how to do research. Of course, practicing faith is not so much knowledge but the gift of faith and your response to that gift.”

For Nicholson, being a stay-at-home wife and mother was her most important role. Not wanting to disturb the household routine, she would often get up at 4 a.m. to study. Additionally, her husband owned his own business; after their three children started school, Nicholson would sometimes go into the office to help.

While she hadn’t set out to earn a degree, Nicholson finally accumulated enough credits that theology professor and adviser Father David Balás, O.Cist, suggested to her that she go for a master’s degree in theology. This she accomplished in 1995 at the age of 70, nearly 30 years after she took her first UD class — triumphantly handing in her thesis titled “The Understanding of the Blessed Trinity in The Living Flame of Love and in the Minor Poetry of St. John of the Cross.”

Now, at 91, she is the oldest living alumnus of the Braniff Graduate School of Liberal Arts.

While Nicholson is of course proud of this accomplishment, she also takes pride in the fact that her three children are all still practicing Catholics; they have given her seven grandchildren and three great-grandchildren so far. Additionally, she took over leadership of her husband’s architectural, engineering and surveying supply business for 10 years when he became too ill to run it.

She has had an active intellectual and civic life, writing book reviews and giving lectures as well as talks to church groups; raising money for the Franciscan Foundation for the Holy Land; serving as a Lady of the Holy Sepulchre; and serving on the board of Bishop Dunne Catholic School in Dallas, where her daughter went, as well as participating actively at Cistercian Preparatory School, which both of her sons attended.

“I’m not very interesting,” said Nicholson. “I was just a stay-at-home mom, and I got my degree for my family, to teach them the faith.”

In the photos: Top: Alice Nicholson and her husband, Edward. Body of story: The Nicholsons with their daughter, son-in-law, and two of their grandchildren. Photos courtesy of Alice Nicholson.