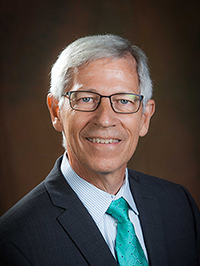 After consulting with members of the University of Dallas Board of Trustees and Faculty Senate, as well as academic deans and administrators, President Thomas W. Keefe began the search process to find the university’s next provost by announcing the appointment of a provost search committee. The chief academic officer position will be left open at the end of the spring semester when Provost Charles “C.W.” Eaker retires.

The search committee, which will be led by Chief Financial Officer and Associate Professor of Management Brian Murray, consists of 16 individuals representing faculty, administration and the Board of Trustees (for a complete listing of search committee appointments, view the official announcement). Assisting in the national search will be AGB Consulting’s Oscar Page, a former Austin College president with experience leading a small liberal arts college and assisting with administrative searches for small Catholic colleges.

Recruitment and screening of candidates will occur in March and April with final interviews anticipated in May. Announcement of a new provost is expected before the next academic year begins in fall 2017.

“I am confident that we have charted a course to identify an exceptional provost for the University of Dallas,” said President Keefe. “I look forward to the engagement of the university community as we continue through the process.”

Prior to his appointment as interim provost in 2014 and then provost in 2015, Eaker served as dean of the Constantin College of Liberal Arts for 10 years. He joined UD’s chemistry faculty in 1976 and was promoted to a full professor of chemistry in 1989. In 1995, Eaker was recognized for his teaching excellence with a King Fellow Faculty Award.

“I’ll be retiring with great appreciation and joy for the time I’ve had to teach and serve at the University of Dallas, and I want to thank you for making our university such a great place to work,” said Eaker upon announcing his retirement earlier this year. “I’m looking forward to traveling with my wife, spending more time with my five grandchildren, fishing, reading, hiking, working on projects and doing volunteer work.”