More Than Luck o’ the Irish 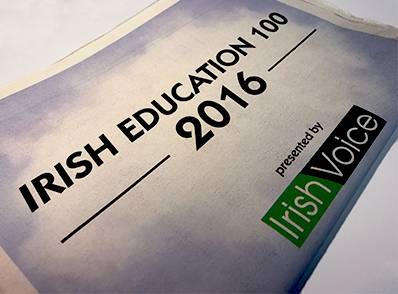 Steady enrollment growth, record-breaking freshman classes in three of the last five years and the largest university gift in the past half century — $12 million for the construction of its state-of-the-art SB International Hall — are just a few reasons University of Dallas President Thomas W. Keefe was named to the 2016 Irish Education 100, an annual list of the nation’s 100 most influential educators of Irish heritage. This year's honorees were recognized during a special invitation only event held at the Irish Consulate in New York City on Dec. 7, 2016.

The Irish Education 100 gives tribute to the enduring Irish success in education, especially at the university level, and its honorees are some of America’s most distinguished and accomplished leaders. The list was first compiled in 2009 by the Irish Voice newspaper in an effort to quantify the Irish commitment to excellence in education in the United States.

“It seems natural that we should pay tribute to the Irish who have made such an indelible mark at colleges and universities throughout the U.S.,” said Debbie McGoldrick, senior editor of the Irish Voice. “Our diverse compilation includes presidents and professors, trustees and administrators and everyone in between, all whom share a bond — a deep pride in their shared heritage.”