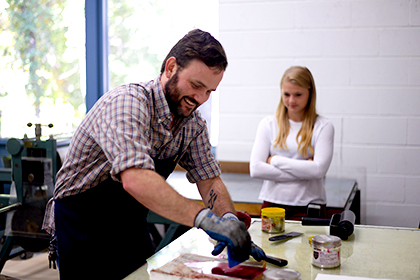 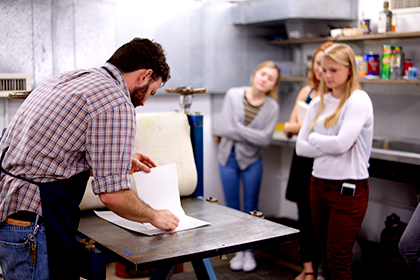 At the end of the spring semester, the Dallas Museum of Art asked Assistant Professor of Printmaking Steven Foutch to craft a printmaking display to include in the museum’s international exhibition, “Visions of America: Three Centuries of Prints from the National Gallery of Art,” featuring more than 150 prints by more than 100 different artists such as Paul Revere, Jackson Pollock, Robert Rauschenberg and Andy Warhol.

“You create the printing matrix by carving linoleum. You're basically making a stamp,” said Foutch, explaining the printmaking process. After creating the stamps, Foutch instructed the class to apply ink with a small roller (known as a brayer).

“When I told my mother I was a printmaking major,” recalled Foutch, “she said, ‘What’s that'?"

The question didn't puzzle Foutch too much. “Printmaking is a weird little watering hole and process that people don’t really understand as a fine art,” he explained.

“The more you understand things that you don’t know, the less frightened you are when you walk about the world,” said Foutch, whose journey and craftsmanship of printmaking continues an important printmaking legacy for which UD’s Art Department is internationally known and respected.

“I knew of UD’s Art Department and Juergen Strunck the minute I became a printmaking major, after seeing posters for the UD Biennial National Print Invitational posted in my undergraduate print shop at Southern Illinois University in Carbondale,” said Foutch.

Not even a decade later, the German-born printmaker Juergen Strunck, professor emeritus of printmaking, became an M.F.A student at UD. In 1968, Strunck began teaching at UD, when the university’s printmaking program consisted of a single room with a broken press.

Strunck helped forge lasting relationships between UD’s Art Department and many of the region’s fine art schools and museums, instructing workshops, hosting lectures and curating exhibitions at the DMA and institutions throughout the country. His prints can be found in over 100 museums and institutions across the world, including the Museum of Contemporary Graphic Art in Fredrikstad, Norway; Fort Worth’s Modern Art Museum; and the DMA.

In 1974, Strunck initiated UD’s Biennial National Print Invitational, bringing together printmakers from across the nation as the university’s graduate printmaking students narrowed down hundreds of submissions to the roughly 50 best prints.

In 1985, Strunck then started UD’s printmaking Matrix Program, inviting advanced printmaking students each spring and fall semester to a collaborative week-long intensive program during which the students and visiting artist create enlarged editions of the artist’s prints.

“UD has a rich printmaking tradition — passed down by the students, who know the rigors of the Art Department and their profession,” said Foutch.

In July, Fouch instructed his first gallery and printmaking workshop, and published his first essay — “The Impact of Printmaking” — inside the spring/summer 2017 issue of the museum’s member magazine, Artifacts, continuing the Art Department’s printmaking legacy and lasting relationship with the DMA and institutions across the region.

Fouch’s printmaking display for “Visions of America” is featured in the same room as Paul Revere's “Bloody Massacre,” one of the exhibition’s earliest hand-colored prints to influence the New World.

“It’s an honor to be chosen by the Dallas Museum of Art out of so many talented printmakers in North Texas,” said Foutch, who regularly gives lectures and workshops at schools and institutions throughout North Texas.

Oftentimes, explained Foutch, his students, lecture or workshop guests are unfamiliar with printmaking as a fine art. “I know the suspicions of contemporary art — it’s confusing, it’s difficult to understand, it doesn’t look like Michelangelo,” said Foutch. “The beauty of a liberal arts education is that it removes your reliance on personal taste when determining value. You don't have to dislike or like a work of art in order to appreciate it. You only need to learn the language and historical context, of any subject really, in order contribute meaningful dialogue.”