Into a World of Wonder 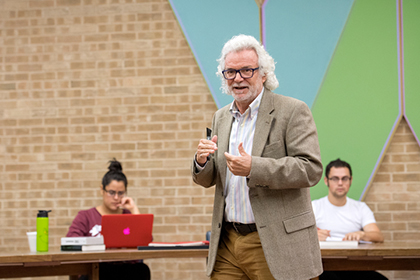 After happening across the early biophilosopher Jakob von Uexküll as a freshman biology major, Professor of Psychology Scott Churchill began peering into the worlds of animals through what Uexküll called the “spiritual eye” rather than our physical one; there, he discovered the animal spirit.

“All animals are spiritual beings,” he explained. “‘Gifted with soul,’ as Aristotle would say.”

As Churchill described, picture blowing a soap bubble around an insect in a meadow. “If you step into that ‘bubble of perception,’ imagine yourself to have the perceptual and motor apparatuses of that animal. When synthesized, these two worlds provide the animal’s ‘Umwelt’ (or subjective self-world​),” said Churchill, reflecting on some of his own experiences within this mode of perception, such as observing his pet jungle carpet python Sparky trying to climb his bedpost and his encounters with the bonobo (pygmy chimpanzee) during class trips to the zoo.

“Animals are forming a cognitive map of their world through a spiritual connection to their environment,” said Churchill, who recently co-authored a research poster (with the assistance of his former student Michelle Alison Granden, MA ’09), using details of his decades-long research, for the annual American Psychology Association (APA) Convention’s Division 34 Society for Environmental, Population and Conservation Psychology Forum. The animal summit organizer Harold Takooshian, professor of psychology at Fordham University, praised the poster as “eye candy in addition to all its substance.”

“I guess we got the implicit prize in the poster exhibition,” Churchill said of their poster, which was titled “Entering Into Animal Worlds: Experiential Approaches to the Environment of Animals and Humans.”

As UD’s foremost expert on animal worlds, Churchill lies on the frontier of a still somewhat new discipline called ecopsychology, which blends together the two sciences of biology and psychology to explore the wonders of our worlds. “I always enjoy​ reading the early gestalt biologists who were so open to all levels of what the universe of life presents,” said Churchill.

As Churchill explained, in the early 20th century, a group of early experimental psychologists sought to define the principles of perception and behavior in relation to our physical world through the “gestalt” (or unified whole). The phrase “the whole is greater than the sum of the parts” is often used to explain this scientific approach, which challenged mainstream thought and paved the way for further exploration into the field of psychology and understanding of human consciousness.

Gestalt biology became part of the foundation of phenomenology, he explained. “​Phenomenological philosophers came to talk about human worlds having learned it from the biologists who talked about animal worlds,” said Churchill. Behavioral psychologists believed animals lacked any worldly perception; they figured that if you ran a rat through a maze, the rat was only learning a series of left and right turns.

“Scientists tested this theory by flooding a maze,” continued Churchill. As the maze filled with water, the scientists observed the rat swimming toward the exit. “It was clear the rat had formed a cognitive map of its own world,” he said. “The gestalt biologists were correct: the whole is greater than the sum of the parts.”

“It was von Uexküll’s exploration of the ‘bubble of perception’ found within the animal’s experienced world that influenced the works of Martin Heidegger, Wolfgang Köhler and other early philosophers and ​psychologists,” said Churchill, who first encountered the work of von Uexküll in 1968 at Bucknell University. As a graduate assistant at Duquesne University a few years later, he began incorporating this perception of animals into class assignments; he asked students to read some of von Uexküll’s work, pick an animal at the zoo and imagine themselves as that animal.

“Everything suddenly came full-circle,” explained Churchill. “I realized the whole field of existential psychology — studying patients’ worlds — can be traced back to the work of von Uexküll, who looked with the spiritual eye rather than just with the physical eye.”

Fast-forward a few decades. After a few years of teaching at UD, Churchill began taking classes to the Dallas Zoo; during class trips, he would press his palm against the display case, gesturing to the bonobo inside.

“When Dr. Churchill touched the bonobo’s hand, there was a connection hindered only by the glass,” said Jessica Callanan, MA ’07.

“My research on animal worlds has become much more sophisticated in recent years, after reading more and more of these early biologists and seeing that it wasn’t just von Uexküll who believed in these otherworldly perceptions,” said Churchill, reflecting on some of his own personal experiences with animals and the study of ecopsychology.

On a visit to the primates exhibit at Bucknell University, Churchill recalled witnessing firsthand the spiritual connection that animals have with their environment. “It’s easy to resonate with the face of a Japanese snow monkey,” he said. “I can’t look at them and see an object; I look at them and all I see is serenity.” The lifelong work of ​Jane Goodall​​ has been a major inspiration​ for ​Churchill's own observations of animal life.​

As a lifelong learner, Churchill is always searching for fresh ideas and ways to incorporate outside disciplines into his research. “The gestalt school is a dead movement today,” he explained. Psychologists are no longer actively researching this approach, he continued, because most of its findings have all been absorbed by more recent viewpoints. This only further motivated Churchill in his exploration of animal worlds.

“I come from an interdisciplinary background, where the way you keep your own discipline from getting stale is by having a cross-fertilization of ideas between disciplines,” he said.

“I believe the real spirit of liberal arts transcends the ​boundaries of disciplines,” said Churchill, who began partnering with Assistant Professor of Biology Deanna Soper on class trips to the zoo last spring. “We bring our students, and together we take turns lecturing while observing gorillas, chimpanzees, elephants and bonobos,” he continued. “There’s a back and forth, a give and take, a mutual appreciation and openness to each other's way of thinking.”

This coming spring semester, Churchill and Soper are co-teaching the university’s first-ever “Tropical Psychology and Ecopsychology” course, in which the students will study tropical habitats and concepts in both disciplines. During spring break, some members of the class will travel to Costa Rica to explore the endangered ecosystem of Central America, and observe the emotional and spiritual connection that animals there have with their environment.

“Even among the greatest philosophers, we should not shut the world of animals out of the purview of science,” said Churchill. “I’m just someone in the 21st century trying to carry on the work of our early gestalt biologists.”

Delve deeper into the study of psychology at UD.