Rekindling ‘The Truth of Human Experience’ 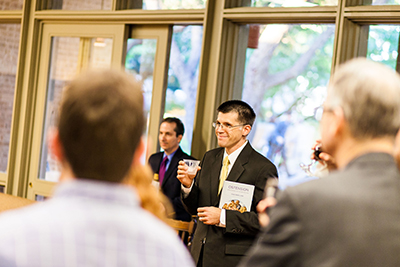 The urgent task of philosophy in our day, according to the renowned German philosopher Martin Heidegger, is to relearn the art of seeing what is before us, argues Chad Engelland, director of the philosophy master’s program, in his recently published book, “Heidegger’s Shadow: Kant, Husserl, and the Transcendental Turn.”

“Thanks to Heidegger, I was cured of scientism and naturalism and made to see the legitimacy of human experience as the place of truth,” said Engelland, whose expertise includes phenomenology or the philosophical study of consciousness and the structures of experience. “No longer do I understand myself as a brain processing stimuli but as an embodied agent of truth dwelling in the world,” he continued.

"No longer do I understand myself as a brain processing stimuli but as an embodied agent of truth dwelling in the world."

— Chad Engelland, director of the philosophy master’s program, whose expertise includes phenomenology or the philosophical study of consciousness and the structures of experience.

His third book to publish in four years, “Heidegger's Shadow” helps to clarify Heidegger’s original transcendental questioning, as well as strengthen the phenomenological movement in order to transcend the opposition of the ancients and moderns.

Engelland crafted each of his three books with a specific audience in mind: “The Way of Philosophy” for freshmen and beginners in philosophy, “Ostension: Word Learning and the Embodied Mind” for upperclassmen and graduate students, and “Heidegger’s Shadow” for doctoral students and fellow researchers in phenomenology.

Intrigued by Engelland's recent discoveries, we decided to reach out to discuss the inspirations that led to him writing “Heidegger’s Shadow.”

Q: What inspired you to study and explore phenomenology?

When I was sixteen I had to get glasses for the first time. I remember the experience of seeing things in high definition after months of fuzziness: the vividness of the individual blades of grass has stayed with me to this day, it was so invigorating.

I feel the same way about phenomenology. It allows us to see what is there before us but which nonetheless we cannot see for we have lost the art of original seeing. Phenomenology is a kind of intensification of life experience, and in this it is akin to art and religion.

One misunderstanding of phenomenology is that it is only concerned with subjective experience, but in fact its true significance comes in restoring faith in experience: we really do draw near to things and know them as they are in themselves. Experience does not happen in our heads but out there with others in the world of things. By recovering the truth of experience, phenomenology recovers the possibility of doing something like metaphysics.

For anyone who has been drawn into the metaphysical questions of the ancients and medievals but who has been puzzled by the epistemological challenges of modernity, phenomenology is a gift from God.

Q: What is the significance of the transcendental turn?

What such naturalism misses, however, is the fact that we only know about psychology, neuroscience, chemistry, and physics because we are able to experience the truth of things, and experiencing the truth of things, though presupposed by all sciences, is not accounted for by the principles of those sciences.  Doing physics, one might say, is not a physical activity, nor is it something merely mental.  It involves, rather, exposure to the things of the world.

A unique task of philosophy, within the university, is to give an account of this experience of truth. Transcendental philosophy maps the possibility of experiencing what is.

Q: Can you briefly describe Heidegger’s complex relation to the transcendental tradition?

Later, though, he comes to criticize the transcendental tradition as missing the historical character of experience.  Accordingly, he attempts a radical reformulation of the philosophy he had put forth in “Being and Time.”  On the eve of that attempt, however, he observes that no philosopher can jump over his shadow but nonetheless it is the vocation of the philosopher to attempt the impossible and to try.

Heidegger’s efforts to move beyond “Being and Time” are, as he well knows, destined to fail, because they remain bound to it as their point of departure.  Heidegger knows he cannot disavow the transcendental tradition without obscuring the way into his thought.  Instead, he refigures and deepens the transcendental turn in terms of historical experience.

Q: What do you aim to accomplish with "Heidegger's Shadow"?

Heidegger is a notorious figure, rightly chastised for his obscure writing style and extremely parochial views.  He is also a brilliant thinker who developed phenomenology by applying its discoveries to the ancient and medieval concern for being.

What emerges in “Heidegger’s Shadow” is a view of Heidegger engaged in the continual task of radicalizing transcendental phenomenology, a program with its roots in Husserl (and Husserl’s reading of Kant) and its branches in Heidegger’s later thought.