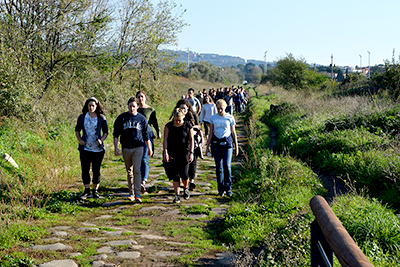 Last semester, nearly 100 UD students, faculty and staff embarked on a 12-mile trek, starting from the Eugene Constantin Campus, along the Appian Way, to Rome. The "Refugee Walk to Rome" lasted more than five hours and raised more than $3,000 for the Catholic Relief Service to support refugees fleeing war-ravaged Syria.

Pope Francis commended the students’ walk-a-thon, praising their efforts and solidarity with the people of Syria.

“He is most grateful for this expression of sharing in the sufferings of our Syrian brothers and sisters, and especially for your prayers for a just and lasting peace in the region,” said Msgr. Paolo Borgia on behalf of Pope Francis.

“Initiatives like this confirm the value of UD’s efforts to educate the whole person for the benefit of themselves and others,” said Dean of the Rome Campus and Associate Professor of History Peter Hatlie. “Thank you once again to all the people who supported this effort.”

Following the walk on Nov. 15, Rome Senior Chaplain Msgr. Thomas Fucinaro celebrated Mass at the Church of San Giorgio in Velabro, one of Rome’s oldest churches. A young Syrian couple, who fled from the tormented city of Homs in 2015 and walked with our UD Romers during the “Refugee Walk to Rome,” were moved to tears by the end of Mass.