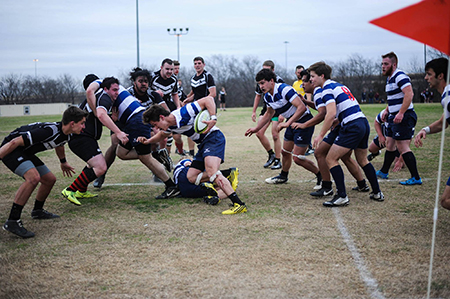 Born through a brotherhood that has garnered affection and popularity among the entire student body since its inception more than three decades ago, the University of Dallas Football Rugby Club (affectionately referred to as the “Hoggies” by the university community) has returned home after competing in the PacWest Regional Championships hosted by the National Small College Rugby Organization (NSCRO). Going where no Hoggie had gone before, this year’s team effectively raised next season’s expectations, finishing out with a nearly undefeated record (16-2) and turning all eyes their way.

This season marks a complete about-face for the Hoggies, according to alumnus and 2015 team captain Alec “Theseus” Thie, BA ’15, who’s also member of the Groundhog Rugby Alumni Association. They’ve become a UD “Cinderella story,” going from only one win on the pitch last season to transforming the club’s coaching and lineup strategy, making strides both on and off the field.

“Going into the season, we had expectations to win, but we never imagined advancing to the national championship round of 16,” said senior Hoggie player John Simpson. “By January, we were undefeated with a record of 11-0, which speaks highly of our new coaching staff.”

Sensing the need for change after three consecutive losing seasons, the players unanimously decided to bring in an outside coaching staff to help inspire, motivate and reinvigorate the club. Then, while visiting a Dallas “Reds” Rugby Football Club practice, senior Hoggie player Jack Teller laid the groundwork to hire one of the Reds’ coaches, Bruce McGregor, with additional coaching assistance from his colleagues Filip Keuppens, who coached the Reds to the 2014 national playoffs, and Dean Robinson. The trio once coached the Texas All Stars together.

Keuppens instilled in the Hoggies a phrase the club and its players now live by: “Better men make better rugby players.”

“Now we are a whole team from top to bottom, which has transformed the club’s overall culture and how we perform on the field, in the classroom and in our personal lives,” said Simpson.

Three weeks ago, the Hoggies defeated the University of Denver (25-22) in the Cowboy Cup semifinals, continuing their forward momentum and advancing to the regional championship in Claremont, California. In preparing to make the cross-country trip to the West Coast, however, the Hoggies realized they had already exhausted the club’s booster money, so players and coaches promptly began a GoFundMe campaign to help raise the necessary funds.

Following the Cowboy Cup victory, in less than 48 hours the Hoggies managed to raise the nearly $20,000 needed to continue their championship run. The raised funds primarily went toward the team’s travel expenses to California, and additional leftover reserves will now go toward funding equipment and uniforms for the new season.

While the Hoggies are classified as a university club, they rely on club funds supplied by the Office of Student Affairs and outside contributions, unlike NCAA sports teams currently housed under the Athletics Department that rely on athletics team funds. Simpson and other players said they would like to one day see the Hoggies moved under the Athletics Department, so they will have access to additional funds and departmental resources.

Though they remain unclassified as an official university athletics team, the Hoggies have successfully entered the national arena, competing head-to-head against the best of the best with a berth in the PacWest Regional Championships, proving their players can balance the rigorous demands of collegiate sports while also excelling in the classroom. To date, 10 new rugby players have already signed and committed to UD for next season largely due to the Hoggies’ recent success on the pitch.

“We carried the legacy of everyone who put this jersey on before us,” said Robinson, who twice served as head coach for the Dallas Reds. “Moving forward, we’re doing something no other team has done before at UD.”