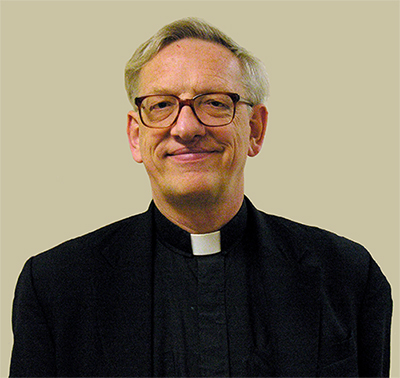 Father Joseph W. Koterski, associate professor of philosophy at Fordham University, will deliver the keynote for this week’s University of Dallas Scherer Lecture, “A Practical Moral Vision for the American Economy,” in which he will address the state of current natural law reflected on economics. The lecture series, sponsored by the American Public Philosophy Institute (APPI) and the Politics Department, will be held this Friday, March 24, and Saturday, March 25, and will feature six scholars from different disciplines and institutions across the country, including first-year APPI board member, Associate Professor of History and Department Chairwoman Susan Hanssen.

"Father Koterski is a nationally known natural law scholar and teacher, and he'll be asking the big questions about how to think about economics — and, with current controversies in the United States, this is certainly a valuable framework to have," said Professor of Politics and APPI President Christopher Wolfe.

Koterski specializes in the history of medieval philosophy and natural law ethics. He is editor-in-chief of the International Philosophical Quarterly and has authored and co-authored a number of books, including “An Introduction to Medieval Philosophy: Some Basic Concepts,” “Medieval Education” (with Ron Begley) and “Culture and Creed” (with John Conley). He earned a doctorate in philosophy from St. Louis University in 1982 and later earned a master’s in sacred theology from Weston School of Theology in Cambridge, Massachusetts.

“In our increasingly hostile political world, we must learn to engage others respectfully,” said Daniel L. Carr, a fellow of UD’s Institute of Philosophic Studies and administrative assistant for the APPI. “In this lecture, students will engage and think critically about some our country’s pressing economic issues.”

The Scherer Lecture honors the late Mary Scherer, daughter of Frank and Jean O’Brien of St. Louis, longtime friends and benefactors of the university and parents of several UD students.

The APPI, founded in 1989 to give natural law theory greater prominence, moved to the University of Dallas in 2014, which sponsors events for students and faculty at the university, and also for Dallas businesses and professional leaders.