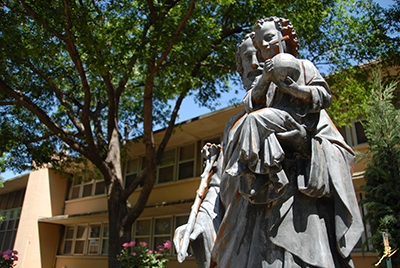 Built in 1885 and hailing from Paris (having spent most of its life in a monastery in the countryside in the South of France), the statue will be officially unveiled in a ceremony on May 5 at 5 p.m. It will be installed in the Father Thomas Cain Courtyard (the stone seating area between Anselm Hall and Augustine Hall). Made of cast iron, five feet tall with a two-foot base, it will be accompanied by a bronze plaque engraved with a portion of the prayer of St. Joseph.

A men’s society of over 50 members, now made up of both current students and alumni, the SSJ was formed by students in 2015. It is dedicated to the formation of virtuous men and the development of future fathers through spiritual, service and social events; St. Joseph, of course, is the patron saint of fathers. The society’s goals include the encouragement and guidance of others on their individual paths toward spiritual growth through prayer, service and community involvement.

Spiritual goals are pursued through weekly rosaries and examinations of conscience, while service has included building the Charity Week jail, helping at the La Buena Vida Landscaping Day, assisting at Goodwill technology drives and serving at the St. Vincent de Paul Society’s food drives, among others. Social events, which seek to spread brotherhood and camaraderie on UD’s campus, have included grilling on the Mall, Ranger games, SSJ dances, Masses and breakfasts.

The SSJ received conditional approval from President Keefe for the statue if they were able to raise the funds from new donors to bring it here — which they did. Gifts pledged and given total over $11,000, with more than 40 new donors to the university.

“We are trying to form virtuous men who are ready to lead their communities once they graduate from this great university,” said Bremar. “It is only fitting that we brought St. Joseph to UD, since he is a true example of manhood as the humble father of the church.”

Photo in story: The statue in its new home.