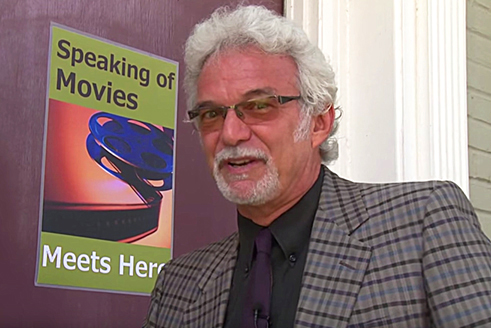 His all-time favorite film is Federico Fellini’s Amarcord, which won an Oscar in 1974 and portrays nostalgic teen days, created in the studio rather than filming on location at the beach so that the aura of nostalgia could be better controlled and therefore conveyed.

“I’ve seen it 30 times or more, but each time feels like the first,” said Professor of Psychology Scott Churchill, who also moonlights as a movie critic for the Irving Community Television Network (ICTN) and is currently teaching a course called “Speaking of Movies,” which culminates in “Dinner and a Classic Movie” on May 15, at the Dallas Institute of Humanities and Culture. One of the Dallas Institute’s most attended programs, it grew out of the film classes Churchill has taught at UD; he enjoys using his classroom skills with adults and finds it a natural growth out of being a classroom teacher at the university, definitely considering it a labor of love.

Churchill has enjoyed movies since he was a kid; he has a preference for “artsy” films, including Fellini’s Kafka-esque dream sequences, the German expressionistic films of the 1920s, the bittersweet romances of Woody Allen, and, generally, films that experiment with narrative storytelling. He also loves 2001: A Space Odyssey and Citizen Kane. Additionally, he is drawn to big epics such as Lawrence of Arabia and to horror films. He has actually taught a two-credit horror film course at UD; the registrar was skeptical that anybody would be interested in a two-credit course, but more than 50 people signed up.

“What I loved most was that it was such a broad spectrum of students,” said Churchill. “Across the disciplines, they wanted to take a course in film.”

He recalls a one-credit film course on Woody Allen that he taught in Lynch Auditorium, which students would leave with tears on their cheeks — tears of joy, naturally.

“It took them out of themselves, and they loved that,” said Churchill.

He discussed how Fellini often writes the dialogue for his films after the filming has already been done, then dubs it in.

“His films are all about emotion and atmosphere, taking you out of your head and into your heart,” said Churchill.

Alfred Hitchcock once said that after a film was storyboarded, the making of it became a drudgery; similarly, for Churchill, planning out the syllabus for a course is like a film director storyboarding a film: the creative work of deciding what goes where is done in advance. Therefore, more recently in his film courses, he decides on a weekly basis which film to show so that the creative process is still happening week by week.

“The students seem to enjoy the surprise each week as a part of the charm of the film class,” said Churchill, who employs the same element of surprise with the monthly class at the Dallas Institute.

Films watched and discussed have included Bogart films as well as some contemporary films such as Woody Allen’s Midnight in Paris. However, as far as contemporary films go, Churchill does not like films that rely too heavily on computer-generated imagery (CGI).

“It doesn’t feel like you’re inhabiting a world,” he said, “and that’s what film is all about: inhabiting worlds of experience.”

For example, he loved animation when it was hand-drawn, but now that so much is done on the computer, he feels no connection.

Around the same time that Churchill began doing movie reviews for ICTN and teaching film classes at UD, he became involved with the USA Film Festival, moderating question-and-answer sessions for screenings with the directors and actors in attendance, as well as occasionally acting as a program consultant. For a decade or so, he was also involved with TalkCinema in Dallas, where films that showed at the Cannes Film Festival would be brought to the U.S. and local critics invited to host Sunday morning discussions at The Magnolia Theater. This work with TalkCinema in Dallas led to an invitation to moderate a discussion at Lincoln Center in New York City, which also had a monthly TalkCinema, as well as, more recently, to leading a group of TalkCinema participants around the Festival of World Cinema in Montreal.

In the film classes he teaches, the emphasis has shifted from history of film to psychology of film, including how up-close images of faces create an experience of empathy; we mimic other people subconsciously, which is empathy in action. Discussing this aspect of film makes students aware of how active they are as viewers.

“The movie is in our heads; we’re literally creating a 'motion picture' out of static images that are flashed on the screen 24 times a second,” said Churchill. “If we’re already doing this, I ask students, then what else could we be doing? Film is not a passive experience.”